Bhubaneswar:  In an aim to make the ambitious renovated and beautified Taladanda Canal in the millennium city Cuttack, the State Government is going to start water sports activities at the canal soon.

According to official sources, the Tourism Department has selected Puri Seafarers Pvt Ltd to operate water sports at the Taladanda Canal. The Water Resources Department has also given NOC (No Objection Certificate) for the project.

Water Resources Deputy Secretary Baikunta Nath Pradhan has recently written a letter to the Assistant Director Tourism Department communicating that the WR Department has given NOC for the ambitious project.

While giving NOC, the WR Department has set certain conditions for the private operator.

The operator cannot dump untreated water, solid waste/garbage into the canal as a prohibitory measure as per a judgement of High Court of Odisha.

The operator will have to follow the instructions issued by Special Single Window Clearance Committee (SSWCC) for operation of water sports activities at Taladanda Canal, Cuttack.

The WR Department is at liberty to review/modify/revoke the permission in case of exigencies. Violation of the conditions will lead to cancellation of permission, warned Pradhan.

To attract tourists to the removed canal, water sports activities like speed boat, water scooter, paddle boat, etc will be put up by the private operator. The operator will charge a minimal user fee from the tourists, sources said.

Notably, under the 5T initiative, the State Government is renovating the Taladanda Canal, one of the oldest canals constructed by the British to provide water to farmlands in Cuttack and Jagatsinghpur districts.

Under the first phase of the project, the 1.5 km stretch on both the sides of Taladanda canal road from Jobra to Ranihat was widened while work from Ranihat to Chhatra Bazar is under completion.

The Cuttack district administration is all set to commence the third phase expansion work of the canal from Nuabazar to Kiribati. The necessary tender has been floated by the Roads and Building department for the selection of an agency to carry out the expansion of the 7 km stretch canal road at an estimated cost of Rs 40.94 crore. The expansion is scheduled to be completed by 2023, the source added 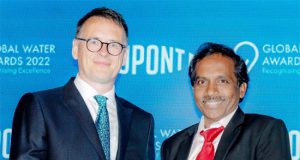