Bhubaneswar: Senior BJD leader and Rajya Sabha MP Dr Amar Patnaik has recommended for setting up of State Level Data Protection Authority (DPA) from a point of view of Constitutional, legal, administrative and jurisdictional balance between the Centre and the State in the true spirit of federalism and also considering the fact that public order, health, education etc. feature in the State List.

While he has presented Dissent Note in the Joint Committee of Parliament (JCP) that adopted the draft report on Personal Data Protection Bill, 2019 recently  Dr.Patnaik, a member of the JCP, has given several suggestions to the JPC for its inclusion in the draft Bill. The Centre has planned to table the Bill before Parliament in the upcoming Winter Session.

The Personal Data Protection Bill-2019 was introduced in Lok Sabha in December, 2019 and, then sent to JPC for further deliberations as many members raised objections to the Bill.

Dr.Patnaik has raised various significant points relating to the design of the Bill and structure of the Data Protection Authority and its independence.

“Besides putting strain on federalism which is the basic structure of the Constitution, it might also create problems in implementations since the State Government would, undoubtedly, be in the best position to implement this law,” Dr.Patnaik pointed out.

Therefore, he said, the Government cannot appear to be taking a pre-eminent position in safeguarding citizens’ informational privacy, as per their whims and interpretation of an event/ occurrence, which is getting conveyed at several places/sections/wordings in the Bill.

It is important to point out that this Bill covers both digital/electronic and manual data (non-automated data). The latter is predominant in all administrative structures at the District level and below.

Therefore, the State Government is in the best position to handle this and not the Central Government, he further said in his note.

Besides, this principle has been followed while designing the Right to Information Act as well as the Consumer Protection Act which creates State level/District level (for CP Act) structures to supplement the Central level Authorities for efficient and effective implementation of those Acts. Moreover, Germany has a three tier Data Protection Authority structure.

Hence, Dr Patnaik urged to set up at least a two tier structure in our country with a National level DPA and State level DPAs in each of the States makes eminent sense and is a constitutional and administrative imperative.

The suggestion for removal of penalties from codification under Section-57 to something to be prescribed by the Government is not acceptable, said the JPC Member.

In order to maintain this balance, stiff penalties had been there in case of EUGDPR and rightly introduced by the Government while introducing the Bill. The same should therefore be retained/ continued in the Bill itself in order to act as a strong deterrent against data fiduciaries obligated to ensure the personal data of Indian citizens.

The selection of each of the members is therefore very crucial, which a committee headed by a Cabinet Secretary, who is a bureaucrat, cannot do justice to. Therefore, the Selection Committee for selecting the members of the Data Protection Authority should be headed by a sitting or retired Judge of the Supreme Court.

Besides, there has to be a prescribed mechanism by law to review each such decision either by a Parliamentary body or by a judicial institutional arrangement, he added. 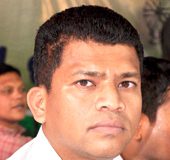 Tathya Correspondent - October 22, 2021 0
New Delhi: What was speculated for quite some time in the political circle, it came true as Odisha Pradesh Congress Committee (OPCC)...