Bhubaneswar: Growing up in the forests of Koraput  and working among tribals across Odisha as a Akhil Bharatiya Vanvasi Kalyan Ashram functionary, Bishweswar Tudu, a first time Lok Sabha Member, has emerged as the state’s tribal face in the Union Cabinet.

He is the Minister of State (MoS)  Tribal Affairs and MoS Jal Shakti.

A diploma holder in Electrical Engineering, Mr.Tudu joined BJP after quitting a state government job with the Balimela hydro-electricity generation project. He won the 2019 general elections from the reserved Mayurbhanj seat.

Though the Mayurbhanj seat was held by Naveen Patnaik’s BJD in 2009 and 2014 elections, it was Mr.Tudu’s hard work and clean image that ensured the saffron party’s victory in the 2019 elections.

Of the 9 Assembly constituencies in Mayurbhanj district, six are held by BJP representatives while three other seats are held by BJD.

The son of former soldier Sukil Tudu, Bishweswar Tudu was closely associated with organizations run by the RSS. His father was also a former sarpanch of Sanamundamani Gram Panchayat under Morada block of Mayurbhanj district.

Apart from his association with the Akhil Bharatiya Vanvasi Kalyan Ashram, Mr.Tudu was also active in the Saraswati Sishu Mandir project of the Sangh Parivar.

His association with the RSS and its frontal organizations dates back to about two decades before he became an MP.

Mr.Tudu also heads the Odisha State BJP’s ST Morcha and is a general secretary of the BJP at the national level.

His elevation to the union cabinet as Odisha’s tribal face was considered strategic as Draupadi Murmu’s tenure as Jharkhand Governor ended recently and she was not given a second gubernatorial responsibility. 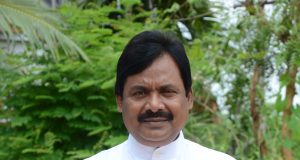 Tathya Correspondent - May 23, 2022 0
New Delhi: Veteran Congress Leader Sarat Patnaik has been appointed as new PCC President of Odisha. This is his...