Inclusion of Core Sanitation Workers under “Highly Skilled” and “Skilled” categories in the Scheduled Employment and provisioning of “Risk and Hardship Allowance”, is a great achievement under the Scheme “Garima,” launched by the Chief Minister on 11 September last year, informed Minister Panchayatiraj , DW ,Law , H&UD Pratap Jena .
Scheme “Garima” envisages,“Safety” and “Dignity” of the Core Sanitation Workers and also provides for appropriate wages and compensation to workers who perform arduous nature of work which primarily include Desludging of Onsite Sanitation Systems, Maintenance of Sewer Network, Cleaning of inspection chambers, Cleaning and maintenance of Septic tank as ‘highly skilled’ & designated as ‘Grade I’ and Cleaning of drains,Cleaning, operation and maintenance of Public and Community Toilets and Operation and Management of Faecal Sludge Treatment Plants (FSTPs) as ‘Skilled’& designated as ‘Grade II’ notified by the Labour and Employees State Insurance Department for the first time.This would entail minimum wage of Rs. 461.00 and Rs. 401.00 by enhancing @ 50% and 33% respectively for the Core Sanitation Workers . Understanding the difficulty and risk taken by the core sanitation workers Chief Minister has approved the “Risk and Hardship Allowance” in favour of the Core Sanitation Workers, said Mr.Jena. The core sanitation workers now will get as part of remuneration @ 15% of the wages (Inclusive of VDA) in recognition of the risky, hazardous and arduous nature of work assigned to them.This allowance shall be paid along with the wages for the day(s) of work which involve the said types of assignments. With this initiative of the Government the Core Sanitation Workers will finally earn the much-deserved title of a skilled/highly skilled worker and a compensation which better appreciates their efforts in making our cities healthy and clean, thereby paving way to build “Swachha Odisha Sustha Odisha”,told Mr.Jena 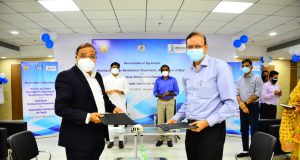 Tathya Correspondent - July 23, 2021 0
Bhubaneswar: In a move for providing sustainable livelihoods to youth in Odisha’s cities and towns, the Department of Housing and Urban Development...