BJP National Spokesperson Sambit Patra in a tweet on Sunday, “I humbly believe that without getting into the ‘Credit War’ the Honourable CM Odisha should have made a courtesy call to the Honourable PM to inaugurate the Medical College in Puri.”

Dr.Patra also objected to the unilateral decision of the Odisha government to inaugurate the medical college developed under a central scheme. He shared a letter the Health Ministry wrote to states in January, highlighting the centrally sponsored scheme.

BJD Vice President, Debi Prasad Mishra rejected Dr.Patra’s allegation and said, “Who will come and what will happen depends on availability and the state government will take the decision on it. The BJD never believes or indulges in credit politics.”

Ahead of the medical college inauguration, Dr.Patra on Monday in another tweet said: “It is good to learn that finally the Odisha government called the Union Health Minister Shri @mansukhmandviya ji to attend the inauguration of “Shri Jagannath Medical College” in Puri scheduled for today. The Union Minister too has agreed to join & address the session virtually!”

All the hospitals under the scheme have been built at an approved cost of Rs 945 crore with 60% of the contribution (Rs 567 crore) from the Union Government. With the inauguration of the SJMCH, all 5 Medical Colleges have become functional now.

Overall, there has been a 55% increase in Medical Colleges in Orissa from 387 MBBS seats in 2013-14 to 596 seats in 2020-21. Under Phase II and III of the schemes for ‘Establishment of new medical colleges attached with existing district/referral hospitals’, two more hospitals in Jajpur and Kalahandi in Odisha has been approved and Central share of Rs 150 Crore and Rs 100 Crore respectively has been released to the State Government, an official said. 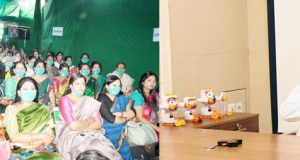