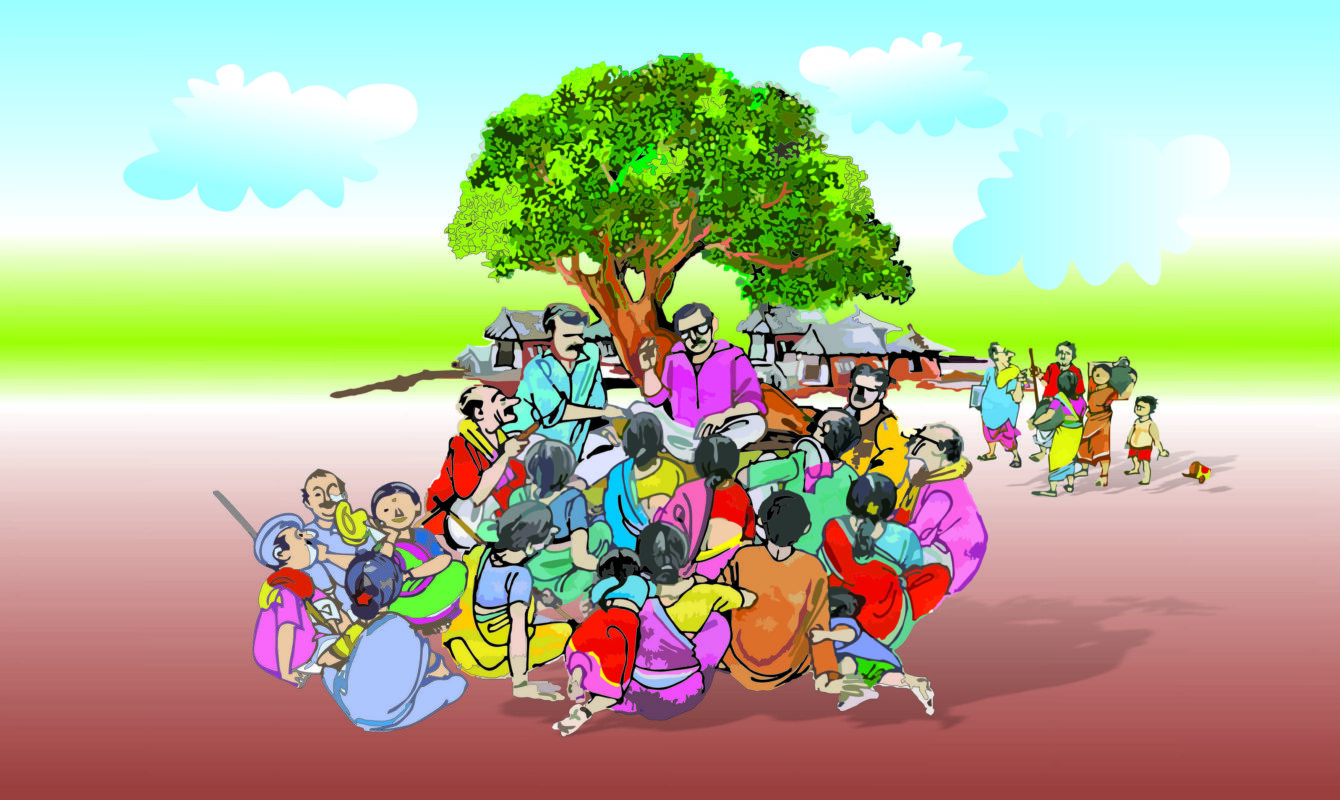 Democratization of justice system should start from the grassroots level through transforming and sensitizing existing dispute settlement mechanisms to assuring human rights and constitutional values and linking them with the formal justice system. This will interface well with the process of democratic decentralization that is presently going on in the country through the Panchayati Raj Institutions (PRIs) as dispensation of justice is critical to any poverty reduction agenda and economic growth. A functioning justice system is not only a mark of development but also a factor of development. Thus, access to justice is not only central to the realization of constitutionally guaranteed rights, but also to broader goals of development and poverty reduction and urgently needs acceptance as a development indicator.

The age-old institutions of local self governance have found new vigor with the introduction of the 73 rd Constitutional Amendment Act (CAA). Strengthening of panchayats and empowering people at the grassroots to resolve their minor disputes amicably would solve many of the problems that are faced by conventional justice dispensation system. Indeed, this would also provide a solution to the problems of accessibility of the courts, for those living in remote regions too.

Self governance envisaged by the constitution must include judicial powers too and that is the rationale for ‘Nyaya Panchayats’ which implies judicial decentralization at the people’s level. Andhra Pradesh, Maharashtra, Karnataka, Kerala and West Bengal have not made any statutory provisions for establishment of Nyaya Panchayats in their State Panchayati Raj Acts. But where laws are enacted, as in Bihar, Gujarat, Haryana, Himachal Pradesh, Manipur, Mizoram, Punjab, Uttar Pradesh, Rajasthan, Sikkim, Madhya Pradesh and Odisha, they are, in most part, non functional. The present scenario seems to be that neither judicial functions are properly enforced nor have Nyaya Panchayats established themselves as effective instruments for settlements of disputes. It is interesting to note that Kerala has not included any judicial provision in the Kerala Panchayat Raj Act, 1994.however, there are cases of ‘Neeti Melas’ (legal aid camps conducted by the Panchayats) and have resolved local issues. Similarly, states like Maharashtra have also
implemented such legal aid camps to provide grievance redressal for the disputes at the panchayat level. Some panchayats have also taken up measures to attain the level of ‘litigation free’ panchayats.

Generally, it is observed that in a few states where Nyaya Panchayats have been performing, their potential has not been fully exploited. There has also been no uniformity among the states on its functions. Most of the Nyaya Panchayats were formed through a system of nomination or a combination of election with nomination. The nomination system by District Magistrate, who would act on the recommendation of lower functionaries, may lead to influential persons being
nominated to serve on Nyaya Panchayats, thus impinging upon the neutrality required for such institutions. The working of Nyaya Panchayats may also be affected due to the members being subjected to influences and pressures.

They also tend to be more expensive for the litigants and thus not people-centric. Hence, they have restricted access to justice as compared to the Nyaya Panchayats. The Gram Nyayalayas with a Nyayadhikari and lawyers representing the parties are still not at the reaching level of the common man.

National Advisory Council (NAC) advised the Govt. of India to introduce legislation on Nyaya Panchayats. On June 25, 2006 a committee was constituted under the chairmanship of Upendra Dahi, and a draft bill was prepared. The bill proposed to Nyaya Panchayats at the panchayat level to resolve disputes before they reach the formal justice system. However, the bill could not be taken to its logical end due to various reservations expressed by the Ministry of Law and Justice, Ministry of Finance and State Governments.

At present, there are more than 2.5 lakhs Panchayati Raj Institutions in India. If Nyaya Panchayats are instituted at the level of each Gram Panchayat it can bring justice at the doorstep. Down the course of history even the existing Nyaya Panchayats have sparingly provided access to justice through a process of participatory mode.

As the subject of Nyaya Panchayats, raises a number of pertinent questions which are to be tackled through discussions for a wider acceptability, a study on the institutionalization of Nyaya Panchayats gains importance. Some states such as Karnataka, Madhya Pradesh and Maharashtra have adopted pilot projects in some districts with a view to adjudicating cases in the rural sector speedily. Under the Karnataka model, which came into effect in April, 1993, special judicial
magistrates adjudicated rural cases at the spot of the dispute. In Jammu and Kashmir Adalat offices are attached with the panchayat and panchayat organizes conciliatory meetings. In Bihar there is separate institution namely “gram kacheri”. Thus the States are addressing the issue through different adhoc mechanisms.

They would dispose of a large number of cases and thus relieve the burden of regular courts. They would succeed in getting a large number of cases compromised through peaceful conciliation. The villagers in general would be satisfied with the administration of justice by a Village/Panchayat court. Appeals and revisions from these decisions would be small in number. There would be speedy and cheap disposal of cases.

The litigants and witnesses who are mostly agriculturists can conveniently attend the courts and thus there would be no interference with agricultural activities in the village. The Panchayat could bring justice nearer to the villager without involving the expenditure which would otherwise have to be incurred in establishing regular court. Local courts, acquainted with the customs of the neighborhood and nuances of the local idiom, are better able to understand issues
at the local level. An institution nearer to the people holds out greater opportunities for settlement and as decision
taken by it does not leave behind that trail of bitterness which generally follows in the litigation in ordinary courts. There are better chances of conciliatory method of approach in Nyaya Panchayats. People in a village are so closely known to each other that the parties to a dispute would not be able to conceal or produce false evidence easily and those who tell lies before the Nyaya Panchayat face the risk of being looked down upon.

Since ages in India, panchayats have been arbitrating on property disputes, torts and even criminal offences like murder and rape since time immemorial. Panchayat (literally five wise men) is a representative body of the members of a particular caste or village (usually headed by the elder most people or the most respected and experienced elder).

There is very much requirement of the institution of Nyaya Panchayats with intent to providing justice to the common man in a cost effective manner, impartial decision, maintaining social harmony, reducing the burden of courts, with the legal provision of Panchayati Raj Act, settling disputes through conciliation.

Need of the hour is to study the various facets of the three types of justice delivery presently prevailing in states namely Panchayat with Judicial Powers (Himachal Pradesh), Separate Courts functioning with the Panchayat (Bihar), Panchayats without judicial powers as per acts (Kerala and Karnataka).

There is requirement to study judicial provisions in the act, territorial jurisdictions, legal jurisdictions, bench for hearing, appeal, role of police, execution, records, and documents, time taken for adjudication, conciliation, role of community, and problem faced by Panchayats. Linkage with formal system of dispute resolution in PESA act will strengthen the system for justice in Panchayats.

This will lead to creation of litigation free panchayats in India which will be best tribute to soul of Mahatma Gandhi.

Tathya Correspondent - January 8, 2022 0
Bhubaneswar: The State Election Commission (SEC) on Saturday held a discussion with the State Government officials for safe conduct of the three-tier...