The bye-poll is politically significant because the opposition BJP has been trying its best to win the seat in Pipili to take revenge of its defeat in the Balasore by-polls in November, 2020. In Balasore by-polls, the ruling BJD had defected the BJP candidate even as the seat was held by the saffron party in 2019 general elections.

The bye-poll is being held in Pipili due to demise of BJD’s sitting MLA Pradeep Maharathy in October, 2020. While the ruling BJD headed by Chief Minister Naveen Patnaik has fielded Maharathy’s son Rudrapratap as its candidate, the BJP has repeated Ashrit Pattnaik, who lost the elections in 2019 by 9,000 votes.The Congress has field Bishwokeshan Harichandan Mohapatra, a new face for the Pipili by-elections. All senior Congress leaders including its MLAs have campaigned for the party candidate.

Though there are 10 candidates are in the fray, the contest is mostly confined among the BJD, BJP and Congress nominees.While Union Minister Dharmendra Pradhan, Balasore MP Pratap Sarangi, Bhubanewar MP Aparajita Sarangi along with BJP national spokesperson Sambit Patra campaigned for Pattnaik, a large number of BJD Minister and MLAs have worked overtime to ensure victory of Rudhrapratap Maharathy. However, BJD President and Chief Minister Naveen Patnaik did not campaign in the by-elections.

All along the electioneering, which started on 20 September, the parties and candidates organized meeting of small groups and made their best of efforts to woo the voters. This apart, all the candidates also focused on the door-to-door campaigning, which was, however, severely affected due to cyclone induced rainfalls.“We have campaigned in different gram panchayats and and sought blessing of the people. I urged them to vote for BJP on 30 September for development and for a change. I am confident that with the love and blessing of the people, lotus will definitely bloom in Pipili,” said Ashrit Pattanayak.

BJD candidate Rudrapratap Maharathy said: “The good works of Chief Minister Naveen Patnaik will help me to win the by-poll. We have held Mahila Samavesh also.My late father’s popularity will also help me.”Congress candidate Harichandan Mohapatra said that the people of Pipili want to get rid of both the BJD and the BJP. “We hope, the people of Pipili will create a new history. They will vote for Congress.”

While voting is scheduled to take place on 30 September, the counting of votes is scheduled to be held on October 3.The by-poll to the assembly constituency was necessary due to the death of sitting BJD MLA Pradeep Maharathy in October last year.

The by-election to the Pipili Assembly constituency was deferred thrice earlier. Initially, it was scheduled on 17 April, but was countermanded following the death of Congress candidate Ajit Mangaraj due to COVID-19, just three days before the poll date. The polling date was later fixed on 13 May, which was again rescheduled to 16 May in view of Eid-ul-Fitr festival. It was postponed again in view of the rising number of COVID-19 cases. 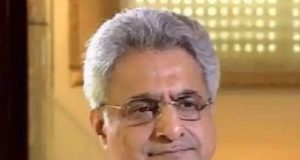 Tathya Correspondent - May 10, 2022 0
Bhubaneswar: BJD MP Pinaki Mishra Tuesday said that the BJP has no authority to question the heritage corridor work around the Lord...