Mumbai: While Government of India is promoting River Cruise Tourism by tapping immense potential of rivers, Odisha is missing the opportunity.

At least 08 Memorandum of Understandings (MoU)s were signed today in presence of Union Minister Tourism and Union Minister Shipping, Odisha was left out as there were no takers for River Cruise Tourism in the Eastern State.

While neighboring states like Assam and West Bengal grabbed  the opportunity, Odisha was left out.

In Odisha there are three prime river cruise circuits, which can be developed on the Mahanadi river, Chilika Lake and Dangmala reserve forest. This will also include the National Waterway-5 from Dhamara to Paradeep.

Chilika Lake in Odisha is the largest salt water lake in Asia, and is a haven for bird watchers and nature lovers. This gorgeous pear-shaped lake has several tiny islands and has fisheries and salt pans. There are also several ecosystems in the region and accommodations in the region.

While there is so much scope, there is hardly any drive to attract major players to tap the opportunity, said an Industry Expert.

08 MoUs include, Mumbai Port and Angriya Sea Eagle Ltd for home porting their cruise ship in Mumbai for the upcoming cruising season.

Mumbai Port and Waterways Leisure Tourism   for home porting their cruise ship in Chennai for the upcoming cruising season.

Mumbai Port and Training Ship Rahaman for being an existing service provider in the field of Maritime Training for Cruise Vessels, it will endeavour to recruit Indian seafarers to support Indian Maritime Vision 2030.

Among the MoUs, Mumbai Port and The Apollo Group USA for being an existing service provider to cruise operator in India, with approximately 600 seafarers, said an officer.

Chennai Port and Waterways Leisure Tourism for home porting their cruise ship in Chennai for the upcoming cruising season.

IWAI and Antara Luxury River Cruises  for River Cruise between Varanasi (UP) and Bogibeel (Dibrugarh, Assam) via Kolkata under the Indo-Bangladesh Protocol Route.

IWAI and Adventure Resorts and Cruises for Development of Long Cruise on Kerela Backwaters (NW-3).

IWAI and JM Baxi River Cruise between Varanasi and Bogibeel via Kolkata under the Indo-Bangladesh Protocol Route. 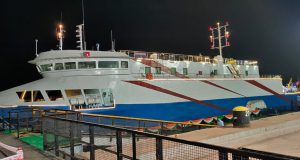 Tathya Correspondent - March 31, 2021 0
Bhubaneswar: Odisha is missing on both Sea Plane and Cruise Service front, which is becoming popular tourists. With Government...