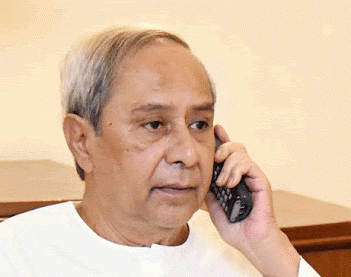 Bhubaneswar: In a bid to get as much support for NDA Presidential candidate Draupadi Murmu, Chief Minister and BJD President Naveen Patnaik on Tuesday sought support of State Congress MLAs in favour of Murmu.

“Spoke to Odisha Congress Legislature Party Leader Shri @NarasinghMishra seeking support for Smt #DroupadiMurmu. It is a matter of great pride for Odisha. Appealed him to ensure win of the daughter of #Odisha to the highest office of the country,” the CM said in a tweet.

BJD Organisational Secretary Pranab Prakash Das said the Chief Minister has instructed all Senior Vice Presidents of BJD and Ministers to meet all Congress MLAs, State Congress President and CPI (M) MLA Laxman Munda, and approach them to vote in favour of Ms.Murmu.

Meanwhile, the lone independent MLA in Odisha Assembly, Makaranda Muduli met Mr.Patnaik to convey his support for the NDA nominee for presidential election.

“Independent MLA Shri Makaranda Muduli met me today. Requested his support for the daughter of #Odisha, Smt #DroupadiMurmu in the #PresidentialElection which he agreed to. She is the pride of #Odisha,” Mr.Patnaik said in another tweet.

He again his appealed all members in the state Assembly to ensure every vote in her favour.

Similarly, a high-level delegation of the Governing party led by Pranab Prakash Das met Pradesh Congress Committee (PCC) President Sarat Pattanayak this evening to get support of his party in the election for the top post in India. Perhaps for the first time in political history in Odisha, the Ruling Party sought support of  opposition for President of India candidate.

Notably, in the 147 seated Odisha Legislative Assembly, BJD has 114 members (including two expelled members), BJP has 22, Congress-9, CPI (M)-1 and an independent.

Tathya Correspondent - June 5, 2022 0
Bhubaneswar: While Chief Minister Naveen Patnaik coolly eased out tainted Ministers from his Council of Ministers, he advised his new Team not...