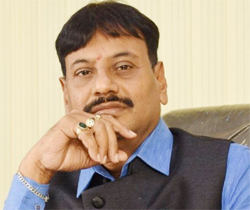 Bhubaneswar: Senior Lawmaker Prasanta Kumar Jagadev once again came to media limelight for breaking the law and rules of this land. This time, his nuisance and madness has crossed all limits.

In a bizarre incident just like the Lakhimpur Kheri in Uttar Pradesh, Mr.Jagadev, a suspended BJD legislator of Odisha Assembly, plowed his car into a crowd at Banapur in Khurda district this morning Saturday.

This incident happened at around 11 AM near the Banapur block office where indirect election for the post of block chairman was underway. Several people and 10 cops were injured in the incident, Khurda SP Alekh Chandra Pahi said.

Following this incident, the irate people thrashed the MLA severely, who was first admitted in Tangi hospital and later shifted to a hospital in Bhubaneswar. The car of the Mr.Jagadev was damaged and overturned by the irate people.

Mr.Pahi said the situation is now under control. As per preliminary information, when BJP supportive Samiti members were entering into the block for the election, the MLA reached there and tried to enter his vehicle into the crowd, he said.

The cops and some people have tried to stop the MLA from entering into the crowd. At that moment, this incident happened in which 10 police personnel including Banapur IIC, the MLA, a journalist and at least six people were injured in the incident, said the SP.  However, no casualty has been reported so far, he added.

Mr.Pahi said all injured people including the MLA and IIC have been shifted to Bhubaneswar for treatment.

The SP assured that strong action will be taken against all people involved in the incident. Security arrangements have been tightened in the area.

Political leaders from across the party line strongly condemned the incident and such irresponsible behaviour of the Chilika MLA.

BJD Spokesperson Dr. Sasmit Patra said Biju Janata Dal strongly condemns this barbaric act by Mr.Jagdev. “Violence has no place in democracy and such a violent act is shocking and unfortunate. We are sure that the police and administration will take the strongest action against the accused as per law,” Dr.Patra said.  For such acts, he was suspended from the BJD, he informed.

The BJD is praying for the speedy recovery of the injured in this incident, the BJD MP said.

Condemning the incident, senior BJP leader Prithviraj Harichandan said, a person of sound mind can never do such an incident and demanded that the MLA should be put in jail. “We hope the Odisha government will take stern action against the legislator,” he said.

Former PCC President Sharat Patnaik said, “The Home Department is under the helm of the Chief Minister himself. He should take this incident seriously and initiate action against whosoever is responsible.”

In September last year, the Biju Janata Dal (BJD) led by Chief Minister Naveen Patnaik had suspended Jagadev following a video that has gone viral in which the MLA was thrashing a BJP leader of his Chilika constituency.

The legislator is infamous for his ‘indecent’ behaviors. In August 2020, a junior engineer had registered a complaint alleging misbehavior by Jagadev over booking a guest house. Prior to that in 2016, he was in media limelight for allegedly assaulting a lady Tehsildar.

Tathya Correspondent - January 2, 2021 0
Aparajita Sarangi, an erudite speaker and a visionary Member of Parliament (MP) has been honored as Best Parliamentarian for 2020.