A 1994 batch Railway Traffic Service Officer, Mr.Haranadh has worked in Indian Railways for 22 years and 5 years in the Ministry of Ports, Shipping and Waterways.

During his tenure as the Deputy Chairman of Visakhapatnam Port from 2015 to 2020, Mr.Haranadh was instrumental in developing innovative marketing solutions like total logistics solutions to customers to attract cargoes like coal, containers etc.

This year, PPA aims to cross the 125 MMT cargo handling milestone. For improvement in Port connectivity, under PM Gati Shakti, the foundation stone of second Exit Road-cum-Flyover has been laid during his tenure. As a part of Vision India 2047, Paradip Port will evolve as a world class mega port with over 750 Million Tonnes Per Annum capacity by 2047.

Mr.Haranadh being at the helm of affairs, Paradip Port has been at the forefront in successfully completing several PPP projects worth over Rs.3000 crore recently, which led to capacity addition of 55 MTPA at the Port.

Paradip Port has recently awarded the Western Dock project of 25 MTPA capacity at a cost of Rs.2392 crore. The first phase of this project for 12.5 MTPA capacity will be completed in 3 years and the overall project in 5 years. On completion, it will enable Paradip Port to have facilities to handle large cape size vessels up to 18.5 metres draft.

PPA Chief Mr.Haranadh laid emphasis on making PPA the Numero Uno Major Port in the country during his tenure.

He stressed on prioritising completion of various upcoming projects at PPA, including the much ambitious Western Dock project at the earliest.

During his visit to Paradip Port, Union Minister Ports, Shipping and Waterways, Sarbananda Sonowal has appreciated his sincere efforts in scaling up operations of PPA.

Union Minister of State for Ports, Shipping and Waterways, Shantanu Thakur praised Mr.Haranadh initiatives to make PPA a Green Port, when he visited the Paradip Port. 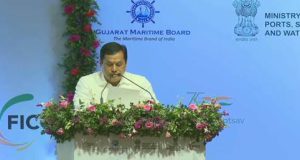 Tathya Correspondent - September 12, 2022 0
Gandhinagar: Union Minister of Ports, Shipping and Waterways Sarbananda Sonowal has said that Gujarat is the business gateway of India and one...