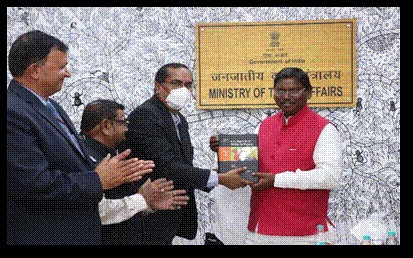 Odisha Scheduled Caste & Scheduled Tribe Research Institute(SCSTRTI) is in the forefront for such activities, said a senior official.

Mr.Jha was speaking in presence of Union Minister Tribal Affairs, Arjun Munda in the MOU signing ceremony held at NTRI.

Mr.Jha said that the project has been undertaken under the guidance of Tribal Affairs Minister, Arjun Munda had advised to develop the unique heritage as the resource centre of upcoming national Tribal Research Institute (NTRI).

Mr.Jha lauded the efforts of TRI Odisha and TRI Uttarakhand who have chalked out a plan to preserve this unique heritage.

S N Tripathi, Director General, IIPA, said that IIT Kanpur is developing National Digital Library and when the books are digitized, these can be added to the vast resource available in national digital library.

Navaljit Kapoor, Joint Secretary, Ministry of Tribal Affairs (MoTA) briefed about the details of activities, which would be undertaken in the restoration project and the time line to complete the project, said sources.

A total amount of Rs.150 Lakhs has been sanctioned by the Ministry for preservation and digitization of Rare Books in BAJSS Library & to develop it in to an E-Library and for revamping of the tribal Museum, digitization of artefacts and making interactive kiosks so as to preserve the unique cultural heritage.

Nayan Chandra Hembram, President of BAJSS thanked the Minister for visiting the site with the team of officers and undertaking the preservation of books and restoration of museum, which were otherwise neglected.   He also briefed about pan India activities of BAJSS and its role in tribal policies and issues since independence.