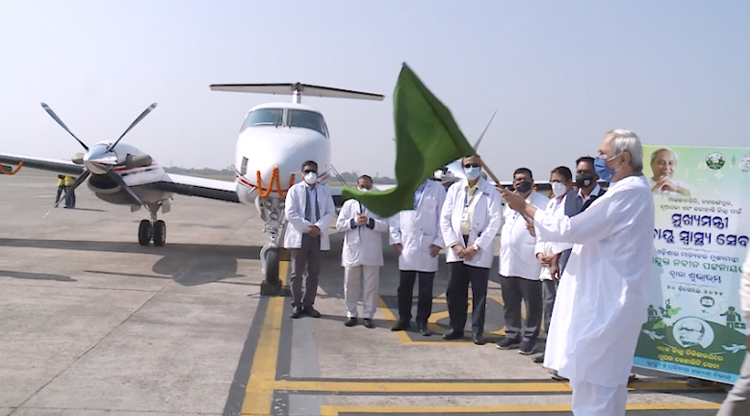 The Chief Minister has launched the service by flagging off the chopper here at Biju Patnaik International Airport (BPIA).  Today a six-member team including senior doctors of super specialty departments of SCB Medical College has flown to Malkangiri.

The service has been launched for tribal-dominated Malkangiri, Nabarangpur, Kalahandi and Nuapada districts. Specialists such as neurologists, nephrologists and cardiologists will be flown to the district headquarters hospitals (DHHs) to treat the admitted patients.

The State government will meet the expenditure to be incurred due to the service, which will be provided free of cost, officials said.

Terming it as a historic move in the field of healthcare, Health and Family Welfare Minister Naba Kishore Das said, “The main objective of the programme is to provide quality health services to the patients, who are unable to visit cities like Bhubaneswar and Cuttack to avail super specialty care.”

“In first phase the service has been launched for four districts. If required we will extend the service to other places, which don’t have proper communication facilities,” Das said.

As per requirement of patients listed out by the district healthcare authority, senior doctors will be deployed to the concerned district through the chopper, said State director of health services, Bijay Mohapatra.  Required medical equipment will also be supplied to the districts, the director added.

Senior physician Datteswar Hota (urologist), a member of the team flown to Malkangiri today, said, “We will stay in Malkangiri for two days (today and tomorrow) and provide treatment to patients while our second team of doctors will stay for another two days to look after the post-surgery care of the patients.”

Last year, the State Government had launched boat ambulance service in Swabhiman Anchal of Malkangiri district and remote areas near Bhitarkanika National Park of Kendrapara district. The service was launched to ferry patients of the remote and interior areas to hospitals and clinics in case of emergency.