She joined  the Ministry of Civil Aviation in July, 2015 as joint Secretary and is serving till date. Now she will serve as Additional Secretary MoCA.

Recently her tenure was extended and she will be serving in the MoCA for more time, officials say.

During her tenure as Joint Secretary Civil Aviation, Odisha has been benefitted greatly as UDAN connectivity was ensured at Jharsuguda Airport.

And now large number of flights is connecting the Hub of Western Odisha.

Soon Jeypore and Rourkela airports will be made operational, thanks to the sincere efforts of Shrimati Padhee.

Recently she received the Prime Minister’s Award for Excellence in Public Administration 2020 under the category Innovation.

UDAN has covered nearly 70 destinations and 420 new air routes have already started and it is scripting huge success, said sources. 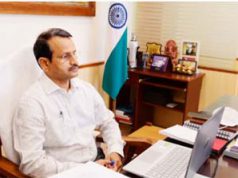