Mr.Tudu said this while reacting over the Mayurbhanj OAS officers black badge protest against him. The officers have accused the Union Minister of abusing one of the OAS cadre member with filthy language over allotment of a room in the Ciurcuit House at Baripada.

The OAS Association also alleged that Tudu restorted to rude behaviour and “derogatory remarks” towards state government officials during his recent visit.

However, Mr.Tudu rejected the allegation and claimed that he was deliberately given a sub-standard room while a special suit was allotted to a state government’s tribal department officer. “This is clear breach of privilege for a Union Minister. Above all, I am the MP of Mayurabhanj district,” he said.

While the OAS Officers Association alleged that the Minister used unparliamentary language against one of its members prompting them to start the black badge protest since last night, Mr.Tudu claimed that the officials are giving a false impression to the state to hide their “anti-people activities”.

Association President Rudra Narayan Mohanty, who is the Additional District Magistrate(ADM) of Mayurbhanj, alleged that the Minister abused him on October 9.

“The Minister on 9 October, 2021 had rung the ADM, Mayurbhanj at about 4.26 PM and asked about the repair of Circuit House, Mayurbahnj. The ADM, Mayurbhanj politely replied that the annual repair and maintenance is going on in the Circuit House. The Hon’ble Minister then used unparliamentary language, scolded the ADM & collector, Mayurbhanj. His language was so obscene and uncalled for which cannot be written in the proceedings (of a meeting),” the Association said in a statement.
At a meeting on Monday, the district officers also resolved to wear black badges in protest against “such unwarranted behaviour” and communicate it to the Association with a request to bring the matter to the notice of the Governor and the Chief Minister.

Asserting that he did not misbehave with anyone, Tudu, however, said he has expressed displeasure as there has been no progress in the implementation of certain welfare schemes for tribal people in Mayurbhanj and Keonjhar districts.

“When I visited Mayurbhanj district from where I have been elected to the Lok Sabha before becoming a Union Minister, the officials allotted me a sub-standard room in the Circuit House just to humiliate me. Instead, an officer in the state’s ST & SC department was given a special suite. This is a clear case of breach of privilege,” Mr.Tudu, a BJP leader, said.

On the officers’ black badge protest, he said he is going to meet the agitating officers.

“I will offer all of them a pair of black dresses each. They should wear black dresses and people should know about their black deeds,” the Minister said.

The tribal leader said he would take up the matter with the Governor of Odisha.

There had been allegations that the minister misbehaved with other officers in the recent past.

“The MPs should fight for the rights of the people. When it comes to developmental activities, one should take all stakeholders into confidence and work as a team,” senior Odisha BJP MP Suresh Pujari said. 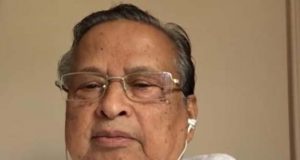