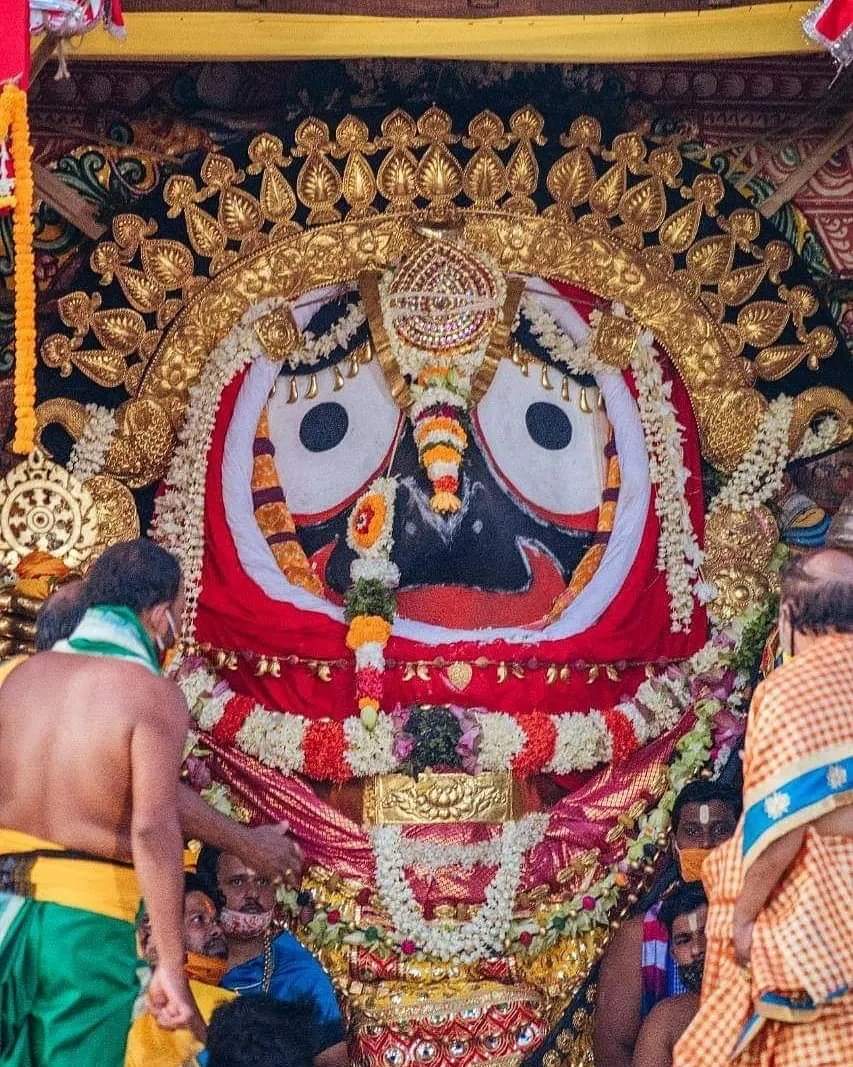 Puri: The Trinity-Lord Balabhadra, Devi Subhadra and Lord Jagannath  were adorned with over 200 kg of gold ornaments in ‘Suna Besha’ ritual on Wednesday in the absence of devotees due to COVID restrictions.

Divine siblings of Shree Jagannath temple were adorned with the jewellery a day after the return car festival or ‘Bahuda Jatra’. The ‘Suna Besha’ is conducted on Ashadha Shukla Ekadashi Tithi or the 11th bright fortnight in the month of Asadha.

However, devotees missed the rare opportunity to witness the golden attire of the Lords ensconced on three majestic wooden chariots for the second consecutive year due to the raging pandemic.

Shree Jagannath Temple Administration (SJTA) Chief Administrator Krishan Kumar appealed to the people to refrain from thronging the road and urged them to watch the proceedings on the television.

The district administration withdrew the shutdown and curfew from the entire town barring a few places near the temple and its Lion’s Gate, where the chariots were parked for the ritual.

It barred congregation on the Grand Road close to the temple and arranged live telecast of the ritual.

All hotels, lodges and guesthouses on both sides of the Grand Road were shut as a preventive measure to avoid gathering of people.

“The shutdown and curfew in some areas will remain in force till 6 am on July 24 in view of Suna Besha on July 21, Adharapana on July 22 and Niladri Bije of the Shree Jews (Lords) from chariots to the Shree Jagannath Temple,” a senior official said quoting a notification issued by the District Administration.

Both the Ratha Jatra on July 12 and Bahuda Jatra on July 20 were conducted in the absence of devotees. Only servitors, officials and police personnel who tested negative for the infection were allowed to participate in the event.

Suna Besha, also called ‘Rajadhiraja Besha’ is performed at least five times a year. It is conducted four times inside the 12th-century shrine when the deities are seated on the Ratna Simhasana, and once on the chariots.

“Suna Besha is conducted inside the temple on Dussehra, Kartika Purnima, Pausa Purnima and Dola Purnima. The trinity is adorned with around 200 kg of gold ornaments from head to toe during the ritual,” a senior servitor said.

As per temple records, the ritual started in 1460 when the then Maharaja Kapilendra Deb brought large amounts of gold jewellery from a neighbouring kingdom after conquering it. He donated all the ornaments to the temple, following which the ritual commenced. The jewellery is stored at the temple’s treasury called the ‘Ratna Bhandar’.

The gold ornaments are repaired using raw gold donated by devotees and are refurbished every year before the event, the servitor said.

Trinity  would be offered ‘Adharpana’ (sweet water) on the chariots on Thursday, and ‘Niladri Bije’ (return to the temple) will take place on July 23, following which they will again be seated on the Ratna Simhasana or the bejewelled throne.

All Eyes On Parikrama Project