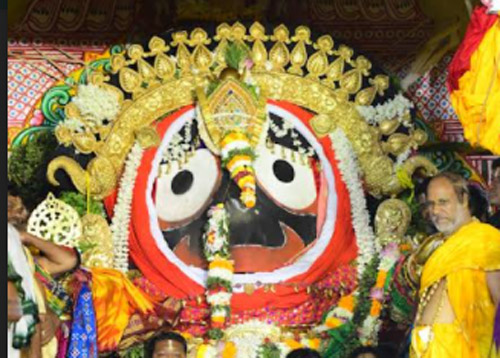 Puri: Beating humidity, lakhs of devotees thronged to the pilgrim town Puri to witness the majestic Suna Besha of the Trinity on their respective chariots on Sunday evening.

Gold ornaments weighing around 200 kg were brought from the temple treasury to the chariots by servitors amid tight security at around 4 pm.

It took almost two hours for the special servitors to decorate the idols of Lord Balabhadra, Lord Jagannath and Devi Subhadra atop the chariot. The ritual, which is also called Rajadhiraja Besha, performed smoothly. Mahaprabhu along with his siblings will give darshan on Suna Besha till 11 PM.

The Holy Trinity has completed their nine-day journey to Shree Gundicha temple. They will return to Srimandir the day after tomorrow. The Trinity would spend two more nights on their chariots. On Monday, they would be offered ‘Adharpana’, a special holy drink.

Meanwhile, elaborate security arrangements were made with deployment of a large number of police personnel to regulate vehicular traffic from Pipili.

Tathya Correspondent - April 14, 2022 0
Nayagarh: Shree Nilamadhab Temple is all set to turn an attractive Center of Pilgrimage, thanks to 5T Initiative under Mo Sarkar Program.