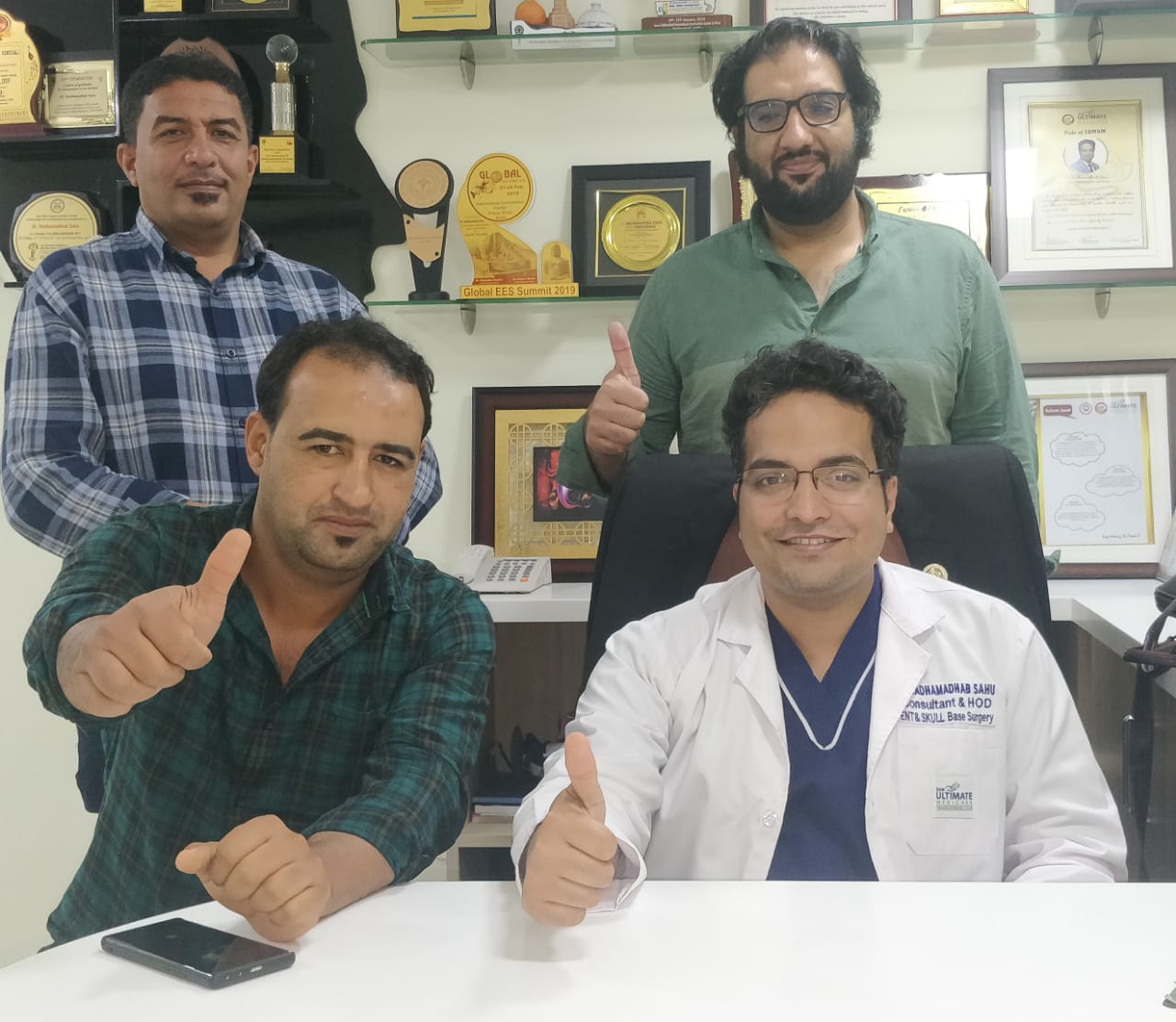 Bhubaneswar: A 38-year-old Iraqi national, suffering from a rare skull base disease, underwent successful surgery at the SUM Ultimate Medicare (SUMUM) here recently providing a push to medical tourism in Odisha as a destination for efficient medical care.

Jasim Kareem Faran Chnani, after recovering from Covid-19, had developed a  swelling on his forehead and left eye which was accompanied by headache for one month. Diagnosis conducted in Iraq suggested that he was afflicted by Pott’s Puffy Tumor with Invasive Fungal Frontal Sinusitis and Orbital involvement.

Jasim’s family looked around for dependable treatment of the disease which was not available in Iraq. Then they decided to fly to India to meet Dr. Radhamadhab Sahu, Senior Consultant and Head of ENT and Skull Base Surgery at SUM Ultimate Medicare here.

Incidentally, Dr. Sahu had successfully treated another Iraqi Hasoon Owaid Oglah al-Shadawi (77), who suffered from Central Skull Base Osteomyelitis, also a rare skull base disease, little more than a month ago.

Jasim and his family members were received at the Bhubaneswar airport by the hospital team and admitted for treatment. Difficulty in the surgery notwithstanding, the team of doctors led by Dr. Sahu comprising neuro-anesthetist Dr. Prasant Behera and ENT specialist Dr. Puja Lakhotia, completed the procedure ensuring a smooth operative and post-operative recovery period for the patient.

The team led by Dr. Sahu opted for an endoscope assisted minimally invasive supraorbital keyhole approach along with transnasal endoscopic approach to radically remove the problem. “This approach ensured cosmesis and avoided facial deformity which is a major drawback of other external approaches,” he said.

Elaborating on the disease, Dr. Sahu said Pott’s Puffy tumour was an infection of the marrow of the forehead bone, also known as the frontal bone, associated with subperiosteal abscess. “It is a rare clinical entity and is usually seen as a complication of chronic frontal sinusitis or trauma to the forehead,” he said.

Dr. Sahu said more commonly the disease affected children and adolescents compared to adults. “Patients may present with redness of forehead skin along with soft, boggy, fluctuating swelling in the forehead or scalp or around the eye. This may be accompanied by headache or complaints like nasal blockage and discharge,” he said.

Explaining the treatment, Dr. Sahu said nasal endoscopy in conjunction of CT scan and MRI aided in diagnosing the condition and planning the course of treatment which was both medical and surgical.

Jasim, who is on the way to recovery, was impressed with the quality of treatment and the high-end facilities available at SUMUM. He thanked the team and staff involved in his surgery and said the care and affection he received were beyond his expectations. “I felt at home in this hospital. Every staff, even the housekeeping personnel, were involved and dedicated in their service and made me feel like I am amongst my family members. I was a human being here, not just a patient and definitely not a medical customer,” he said.

Dr. Sahu said patients from Odisha had been known to travel to other states and countries in the past in search of medical care but the scenario was changing.

SUMUM provides end-to-end patient care services for international patients travelling to the hospital for treatment with established protocols and plans in place for safe handling of patients.

“International patients travelling to SUMUM marks the dawn of medical tourism in Odisha and it also means that time has come for people of the state and other states to visit Bhubaneswar for dependable and superior treatment,” he said.