Bhubaneswar: The Crime Branch of Odisha Police would seek help of the International Criminal Police Organization (Interpol) to identify the suspected woman operative on the DRDO information leak case.

During the investigation so far, the police have found that the suspect woman was chatting and making video calls with the accused on social networking sites like Facebook, WhatsApp and Instagram, using a UK mobile phone number.

As per the established procedure, the Odisha crime branch would seek help from the Interpol to get details of the UK mobile number, which was used by the mysterious lady handler, said Additional Director General (ADG) Crime Branch, Sanjeeb Panda.

He further said that the photograph of the woman operative has been obtained along with footage of her video calls with the five arrested ITR-Chandipur employees.

The bank account details of Dubai from which money was transferred to the bank account of one of the accused has not been established so far, he said, adding, “It may be the account of any associate of the suspected woman.”

One team of the Crime Branch is there in Balasore to investigate whether the accused have received money from any other sources, Panda said.

Earlier, the ADG of Odisha police had said the ‘mysterious’ woman had made video calls to two of the accused in Hindi and she was in contact with the five accused through seven Facebook accounts under different names and profile pictures.

The suspected woman operative had also given marriage proposals to two of the arrested accused and promised to visit the house of another accused located in Chandipur.

The police are working on how to frame the charge sheet as soon as possible in this case, he added.

It should be noted that the Odisha police on September 14 had arrested five former contractual employees of Defence Research and Development Organisation (DRDO) unit at Chandipur, on charges of sharing classified defence information with unknown foreign agents, who were suspected to be from Pakistan. 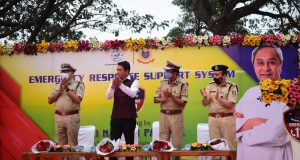