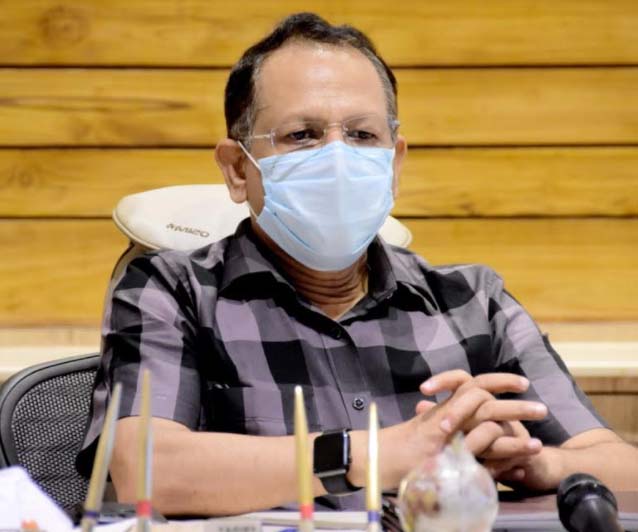 Bhubaneswar: The possible cyclonic storm over the Bay of Bengal is likely to make landfall in between north Odisha and Bangladesh coast on May 26 and the State Government is ready to deal with it, Special Relief Commissioner (SRC) Pradeep Kumar Jena said on Friday.

Mr.Jena said that as per the latest information received from the India Meteorological Department (IMD), a Low Pressure Area is going to evolve by tomorrow in the north Andaman sea and east central Bay of Bengal.

It is likely to intensify into a depression by May 23 and into a cyclonic storm by May 24. It is expected to move northwestwards and may touch the landmass in between the north Odisha coast and Bangladesh on May 26.

Jena however said that the exact path, location of the landfall, speed, intensity, and likely impact of the cyclonic storm, including rainfall, have not yet been predicted; it is still under assessment.

Stating that the National Disaster Management Authority (NDMA) held a discussion with various states today and reviewed the preparedness, the SRC informed that Odisha has taken up several preparatory measures in association with the district Collectors and SPs, line departments, telecom operators, electricity department, distribution companies, and other stakeholders.

The State Government is in touch with the Coast Guards. They are now patrolling the deep and shallow sea areas ensuring that none of the boats remain in the sea by tomorrow evening, said Mr.Jena.

All other preparatory measures required for evacuation, shelter management, post-cyclone restoration are in full swing. Odisha Disaster Rapid Action Force (ODRAF), National Disaster Response Force (NDRF), and Odisha Fire Services personnel are being mobilised and they will be deployed to vulnerable areas in the appropriate time, he added.

Even though there is no clarity on the place where possible cyclonic storm Yaas over the Bay of Bengal is likely to make landfall, Odisha DGP Abhay today reviewed the preparedness of the Odisha Disaster Rapid Action Force (ODRAF).

Twenty units of ODRAF like the Odisha Fire Service have been put on alert.

The ODRAF unit stationed at OMP here has also geared up in view of the possible cyclonic storm Yass hitting Odisha.

DGP Abhay visited the ODRAF unit at OMP and said that ODRAF is fully geared to tackle the situation.

The Indian Coast Guard (ICG) said that it is closely monitoring the weather development and has initiated pre-emptive /preventive measures.

Though fishing ban is enforced in the east coast of India, Coast Guard Dornier and Ships at sea are intimating the fishermen operating close to coast and those at sea about likely formation of cyclonic storm over Odisha/West Bengal coast and directing these fishing boats to return back to harbour for safety.

Additionally, Radar Stations of ICG in the states of West Bengal and Odisha have also started transmitting weather warnings over VHF at regular intervals both in English and in vernacular language to alert Merchant Vessels and fishing boats operating at sea.

ICG has also requested State Governments of both West Bengal and that of Odisha to sensitize fishers and accounting of fishing boats present in harbor.

Tathya Correspondent - May 12, 2021 0
Bhubaneswar: In view of the prevailing COVID-19 pandemic, Odisha Government has decided to deliver public services  pertaining to Revenue and Disaster Management Department...