Bhubaneswar: Odisha Government has been proactively following a policy of promoting and developing non-major ports in the State in PPP Mode since 2004, State’s Minister Planning & Convergence, Commerce & Transport Padmanav Behera said on Wednesday.

Two Ports have been functional and three are in the pipeline including proposed Mahanadi Riverine Port in Kendrapara District. Development of National Waterways five will be economical viable and provide an alternative route for transportation of minerals to Paradip, he said while participating in a special session with States—Investment Opportunities Odisha at the Maritime India Summit-2021 here.

Behera said the State Government has entered into several MoUs for establishment of heavy industries in the sectors like steel, thermal power, aluminium and petrochemicals in the State.

Development of Port Sector will play in sustainable and  inclusive growth of the State, he added.

“Odisha has been at the center of PM Shri Narendra Modi’s Purvodaya vision also. Massive investment is being made to promote infrastructure development activities across the various industrial & commercial sectors in Odisha, It is emerging as the energy gateway of eastern India,” he said.

Odisha’s long coastline is going to be the epicenter of development and growth in the region. More job opportunities, more entrepreneurial activities will enhance the pace of economic empowerment, Mr.Pradhan said.

He urged all stakeholders to unite their efforts as a team to help create an Aatmanirbhar Bharat.

Principal Secretary Commerce & Transport Madhusudan Padhi elaborating on port sector and port-led development in the State of Odisha said that as per study by IIT, Chennai, 14 locations have been identified for development of non-major ports.

“Odisha Government is following a proactive policy, in which pvt. Players are encouraged to establish Ports in BOOST method. For upcoming Mahanadi Riverine Port, PPT is going to be signed and MoU will be signed soon,” he said.

Mr.Padhi said the upcoming 12 MT JSW Steel plant is going to establish a port at Jatadhari mouth. The concept of port-led industrialization future success story of Odisha,” adding, “A port near Nua Nai in Puri will promote cruise tourism in the region and can be a clean cargo dealing container Port. Transparent Port policy and friendly industrial policy will make journey of potentials investors, easy.”

Principal Secretary Industries Hemanta Sharma highlighting the port-led development in the State said that Odisha is growing leaps and bounds in industrialization trade and commerce.

“State is currently surplus in electricity, rich in industrial water and  of late, intense hinterland road, rail network. We have a very skilled and professional workforce for upcoming industrial economy. In the last few years both the state and Central Government are trying to develop hinterland infrastructure like road, rail, airport and pipeline etc. so that they will link the industrial clusters with the Ports,” Mr.Sharma said.

Today the Ports of Odisha are the gateways to the ASEAN countries. Ports will definitely add to the Industrial infrastructure, he added.

CEO AMNS Dilip Oommen said that for setting up a Steel Plant one must rein in cost of logistics, the 480 KM long sea coast and the vast mineral deposit gives Odisha an advantage.

For rapid industrialisation CAGR has been 10.4, PPT is doing wonderful job in cargo movement. OSBD is remarkable and the business has grown 9 times within last 18 years, he said.

Mr.Oommen said for skill development the Odisha Government needs to do more sea pre-cycling industry must be given a boost more ship preparing must be there.

“We should add value to the iron ore by making more steel exports. The AMNS wants to make Odisha steel hub of India,” he added.

JSPL Managing Director VR Sharma called for dedicated Ports may come up related to exports of steel in the State. Eastern belt of the country is having 28 MT steel export capacity.

In PPT just two berths are handling steel as a result majority of the cargo going to Vizag Port, it can be the other way round.  Another four dedicated berths for exports of steel may come up at PPT under Atmanirvar Bharat, he said.

From day one it will handle cape size vessel. The vision for maritime sector in Odisha for Tata Steel is to strategically one port each of its plant to keep it supply chain going. Paradip Port to Angul plant, Dhamara Port to Kalinga Nagar plant and Subarnrekha Port to Jamshedpur plant.

For production of additional 30 MT steel, the ports will handle additional 32 MT. raw materials. Tata Steel is signed agreement for Kalinga terminal at PPT, he said and added that for development of Western Dock, Tata Steel will be interested. This is how Tata Steel has designed its supply chain network 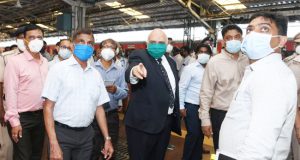