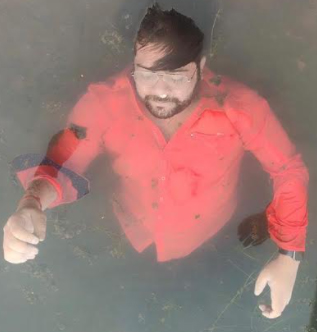 Bhubaneswar:Twin City Police Sunday recovered the body of a 30-year old man under mysterious circumstances from a pond at Patrapada village on the outskirts of Bhubaneswar, police said.

The deceased was identified as Manish Anurag Das, the elder son of senior journalist Navin Das. Manish had gone missing from Infocity police limits on Saturday.

The family members alleged that Manish was kidnapped and later killed. “We have registered two cases, one at Infocity police station and another at Tamando police station after recovering the body,” Bhubaneswar DCP Uma Shankar Dash told reporters after visiting the site.

The body was sent to AIIMS Bhubaneswar for autopsy and further investigation is underway, police said.

The DCP said: “The youth had made a call to his family members and informed that he was with two youths. Later, the family members claimed to have picked up a ransom call.”

He said the police has been investigating into the allegation of kidnapping and demand for ransom. The police was still clue less as to how the body came to the village pond at the outskirt of the city. A Special Squad has been formed to probe into the case, Dash added.

Senior officials said that all the CCTV cameras around the spot where Manish’s body was recovered are being thoroughly examined.

Nabin Das is the Editor of Odia daily ‘Nirbhay’.

Tathya Correspondent - October 9, 2021 0
Bhubaneswar: Twin City Police Commissioner Saumendra Priyadarshi on Saturday said stringent action will be taken for any kind of violations during the...