Bhubaneswar: Who is going to benefit if the banners and posters of BJD Supremo and Chief Minister Naveen Patnaik are disfigured or torn down by the saffron party leaders or vice versa? It is certainly not in the interest of the 4.5 crore people of the state to see the pictures of either CM Naveen Patnaik or PM Narendra Modi being removed at different Covid-19 vaccination centres. Recently, there were reports of replacement of hoardings and banners of Naveen with Modi’s. The opposite scene has also been witnessed in some other places, mostly in Balasore, Angul and Boudh districts. The BJP leaders including Union Minister Pratap Sarangi and Bhubaneswar MP Aparajita Sarangi joined the bandwagon and blamed the governing BJD for putting Naveen’s hoardings at the vaccination centers.

The BJD leaders including Senior Vice President Debi Prasad Mishra, Rajya Sabha MP Sasmit Patra and others also criticised the BJP leaders for removal of Naveen’s pictures from the vaccination sites. The ugly quarrel continued between the leaders, workers and supporters of both the parties. The people in BJP had specific allegations that the BJD was attempting to take mileage out of free vaccinations sponsored by the Central Government. They argue that the PM’s picture should also have been displayed along with the CM’s. This is because the PM had announced vaccines to be free and supplied to the state. The BJD is stealing the thunder of the Modi Government.

However, Debi Prasad Mishra had a different argument that the state government was instrumental in vaccinating people in the villages and towns. This apart, Naveen is a tall leader in the state whose appeal to the people for mass vaccination also helps. Therefore, there was no mistake in displaying Naveen’s pictures. However, BJP accused the BJD of falsely abrogating credit for the vaccination programme fully funded by the Centre. Sasmit Patra, however, claimed that the central funding for vaccination does not exactly come from the BJP’s party account, rather it is people’s money which is being utilised for them. When all other vaccines are distributed free among the people for decades, free vaccines for COVID-19 are naturally funded by the centre.

This is not all, the BJD leaders argued that they had no objection when the vaccination certificates issued to the people of Odisha carried Modi’s pictures. Why should the BJP object to Naveen’s picture in vaccination sites, asked BJD’s Balasore MLA Swarup Das.

Anyway, the quarrel continues over the CM and PM’s hoardings in the state, But, what has come as a surprise is that the senior leaders like Union Minister, party Vice-President, Rajya Sabha and Lok Sabha MPs become part of the slugfest. At the end of the controversy the question automatically comes to the mind of people: the fight is for whose interest? Both the Prime Minister and the Odisha Chief Minister have reached such a height that a small hoarding or banner would never affect their towering images. It also in no way helps people or checks the infection among the masses.

The COVID-19 pandemic which torments the entire human race across the globe including Odisha for over 18 months, is a great leveller. It sees no difference in BJD, BJP or Congress. People across the spectrum have been affected and all should join hands on how to fight it out. Unfortunately, the political parties in India as well as in Odisha, find it an opportunity to take mileage from the government programs like vaccination, free treatment, testing and others.

While the BJD Government in Odisha has been going on informing the masses that the state provided free treatment, medicines, testing and others, the BJP now grandstands the free vaccination campaign. All want to draw political mileage from the situation when the virus goes on mutating and taking tolls on innocent people.

It is altogether a different factor that the opposition BJP since it took charge of Centre in 2014, has been complaining that BJD has all along extracted mileage from the government’s welfare programs like Pradhan Mantri Awas Yojana, Ayushman Bharat, 108 Ambulance and also on cheap rice for the poor people.

It is understood the BJP’s concern on other schemes or programs allegedly being hijacked by BJD. The saffron party has also made similar allegations against Mamata Banerjee’s TMC Government in West Bengal. But, everybody knows the results of Bengal after Mamata won the 2021 assembly polls hands down. However, doing politics during the pandemic, in fact, sounds politically incorrect. Both the BJD and the BJP should be serious and understand the gravity of the situation instead of quarrelling over a poster or a banner.

There is ample scope for the saffron party or BJD to put hoardings of Prime Minister Modi or Chief Minister Patnaik in nook and corner of the state. The parties can give a message to the people on vaccination and COVID-19 appropriate behavior by putting pictures of their leaders. Who stops BJP or the BJD to put hoardings of Modi or Naveen in central places of the state capital? What is there to boast about at vaccination sites where the people go for inoculation to save their lives?

According to the political observers intolerance is behind the actions of both the parties. Nobody wants to tolerate the other. The BJP people fear that the BJD will gain if there is a picture of Naveen at the vaccination site and people will consider that the free vaccine is being provided by the State Government.

The people, to whom Naveen often refers to as the ‘Masters’ are no more fools in the digital world where every event or development is being monitored by the masses. YouTube, Twitter, Facebook, Whatsapp, Instagram and others are not unknown to the people of Odisha, which consumes maximum data in the eastern India. People know everything, particularly on which government, whether the centre or the state, is doing what for the people and even they are aware how much money is being spent for the welfare of the people.

Under this backdrop, it is high time that the political parties should refrain from fighting over petty matters and show broadness at least during the pandemic. 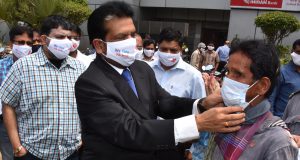 Extending A Hand Of Support