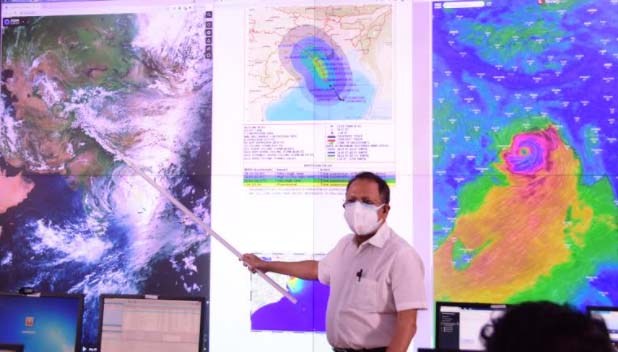 Bhubaneswar: Odisha Government has the target of evacuating the people in the districts likely to be affected by the impending Very Severe Cyclonic Storm ‘YAAS’ by Tuesday evening.

According to Special Relief Commissioner (SRC) Pradeep Kumar Jena while there are around 860 permanent shelters, 6031 additional cyclone shelters have been identified.

“Altogether, around 7.5 lakh people can be accommodated in the shelters,” he added.

Mr.Jena informed that in view of the latest predictions, the State Government has geared up for the possible landfall anywhere at Bhitarkanika, Chandbali, or Dhamra area of Odisha.

Based on the tracks, if the landfall occurs at Dhamra or Bhitarkanika, Collectors have been instructed to evacuate vulnerable persons at Bhuban, Kankadahad and Gondia in Dhenkanal district, Pallahara and Kanhia in Angul district, and Bonai and Lahunipara in Sundargarh district in view of the surge in wind speed by tomorrow afternoon.

The SRC further informed that rainfall above 50 mm has been witnessed in 35 blocks in the last 24 hours with the highest rainfall being recorded at Rajnagar in Paradip. Squally wind has been continuing over the coastal areas which may intensify after today evening.

Wind speed of 60-90 kmph is expected at some areas in Puri, Jagatsingpur, Cuttack, and Bhubaneswar, he added while requesting all the vulnerable people in these areas to move to safer places.

The evacuation will take place in seven districts – Balasore, Bhadrak, Mayurbhanj, Puri, Kendrapara, Jagatsinghpur, and Jajpur, in the wake of Cyclone YAAS which will make landfall on the wee hours of Wednesday.

Additional DGP (Law and Order) YK Jethwa who is supervising the evacuation process said till Tuesday afternoon, 81,661 people from vulnerable areas have been shifted to cyclone shelters.

“The evacuation drive is being carried out on priority. Over the next few hours, the drive will be expedited and completed,” he said.

Following the evacuation, the focus will be on the deployment of men and machinery for relief and restoration work. So far 60 formations of Odisha Disaster Rapid Action Force, have been posted at vulnerable locations, 55 platoons of OSAP have joined ODRAF to assist in rescue and recovery.

This apart, the NDRF, and Odisha Fire Service teams are also stationed at important locations under the supervision of district police and administration. The ODRAF teams have high-end equipment and earth-moving machines to effectively carry out restoration work, said Jethwa.

“We have equipped the teams with boats to reach out to inaccessible areas, satellite phones for uninterrupted communication, and high-end generators for power supply, to enable the rescue teams to carry out their work promptly and effectively,” he added.

Health Department has formed 308 health teams, 215 additional generators have been arranged at all the health centers, adequate amount of drugs are available and adequate arrangements have been done for the stay of all doctors, paramedic staff, patients, and their attendants at the hospital, he added.

Pact For Make In Odisha

Tathya Correspondent - October 20, 2020 0
Chief Minister Naveen Patnaik has said that the State has established itself as one of the premier investment destinations in the country.