Bhubaneswar: In view of the public anger over the violence against Media Men during the third phase of polling for the three-tier panchayat elections in Odisha, the Police Monday arrested at least 11 persons, including 5 women, over their alleged involvement in attacking scribes.

The three journalists, Debashis Sahoo, Gulshan Ali Nawaz and Bijay Sahoo– were mercilessly beaten up by the offenders while covering booth rigging incident at Bachol in Binjharpur area of Jajpur district on Sunday.

Prime accused Rakesh Malik was among the 11 persons arrested by Police.

Around 40 miscreants had allegedly attacked the journalists. They too damaged the vehicles of the scribes. Police had rescued the trio and admitted them at the district headquarters hospital.

The police have registered three separate cases and picked up 25 persons, including 10 women, for questioning.

When a delegation of Journalists met the State Election Commissioner, Aditya Prasad Padhi, he too condemned the incident and directed the DGP, Odisha to take stringent action against the culprits.

A Team of Jouranlists went to meet DGP and presented a memorandum to him, who assured action against the miscreants.

“Investigation is going on in case of an attack on journalists. All persons involved in the case will be arrested soon and strict legal action will be initiated,” Jajpur SP Rahul PR said.

A local journalist in Odisha’s Kalahandi district was also killed in an IED explosion suspected to have been planted by the Maoists in the run up to the panchayat elections on February 5.

The Red Rebels had called upon people to boycott rural polls and put banners and posters to give messages to people. When local journalist R K Biswal approached near the poster, the IED went off killing him on the spot.

Earlier during the first phase of polling for the panchayat elections, the miscreants had also attacked journalists in Puri and Nayagarh districts.

In another incident, a group of local people at Santragadia village under Nilagiri Block of Balasore district on Monday intercepted a police van and freed a youth who was arrested on charges of attacking a web journalist during the third phase Panchayat polls on Sunday.

The villagers took away the accused soon after releasing him from police custody using force, police said, adding that a case was registered based on the FIR lodged by journalist Lelin Kumar Dey on Sunday.

A report from Kendrapara district said that the police have arrested two persons including a Sarpanch candidate Monday on the charges of assaulting a police man during the third phase of panchayat polling on Sunday.

Krushna Chandra Behera, the Sarapanch candidate of Dera Gram Panchayat and one Panchanana Rout were arrested on the charges of assaulting a police officer Soumya Ranjan Panigrahi on Sunday at booth number-3 at Gokhani village under Dera Panchayat  under Rajnagar block of kendrapara.

While other accused persons managed to flee from their villages, the police have been raiding their hideouts to nab them, said the Inspector of Rajnagar police station Tapan Kumar Nayak.

Meanwhile, many BJP supporters on Monday gheraoed the police station at Rajnagar and alleged that the police at the behest of ruling party leaders illegally arrested BJP leader and Sarpanch candidate Krushna Chandra Behera.

In another poll related violence, police on Monday arrested five miscreants on the charges of assaulting three persons at village Bangalapur village under Patkura police station in Kendrapara district.

In another incident, the Bhadrak District Collector Trilochan Majhi said he has ordered a probe into the allegations of poll rigging by a woman at the Badagallo polling booth under Fatehpur Panchayat in Tihidi Block during the third phase voting for the Panchayat elections on Sunday.

The woman has been identified as Ritanjali Patra, a Zilla Parishad Candidate from Zone-8. 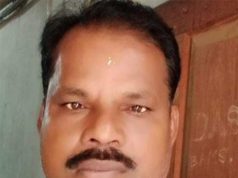 Tathya Correspondent - December 17, 2021 0
Bhubaneswar: While The Indian Newspaper Society (INS) got a new Team for the year 2021-22, Noted Journalist, Samahit Bal, Executive Editor of The...