Bhubaneswar: The Congress is likely to appoint a President for its Odisha unit within a week, said the party’s state in-charge A Chellakumar who on Tuesday held a series of meetings with senior leaders in Bhubaneswar. It seems Sarat Patnaik is front runner for the PCC Chief job.

“As incumbent State Congress President Niranjan Patnaik has submitted his resignation, it is my duty to hear the views of all the leaders, including lawmakers, for selecting someone to lead the party,” he told reporters.

“We want a leader who can take all the party leaders together and perform. The objective of making the change of guard in the state Congress is to rejuvenate the party and bring it back to power,” he added.

After a series of dismal electoral performances, including the recently-held panchayat and civic polls, the state Congress is saddled with growing resentment.

“I will submit a report to the AICC President and the party will announce the name of the new state Congress President soon. The name may be announced in three-four days or a week,” said Mr.Chellakumar, the AICC general secretary.

Mr.Patnaik had submitted his resignation as the State Congress President after the 2019 elections, but is yet to be relieved from the post.

On the suggestion by the party’s Jeypore MLA Taraprasad Bahinipati that a sitting Legislator be made the President, Mr.Chellakumar said that different names are being considered.

However, he dismissed the speculation about the resignation of Congress Legislature Party (CLP) leader Narasingha Mishra. “In politics, rumors do make rounds.”

Mr.Mishra, who had a one-to-one meeting with Mr.Chellakumar, said, “I had a discussion on different important issues. I may say something when the time comes.”

Congress MLA from Kantabanji in Bolangir SS Saluja said some MLAs have sought a change of the CLP leader as well.

Meanwhile, Mr.Patnaik said that he was happy that the AICC started the process of selecting a new state president.”I will support any leader chosen by the party’s high command,” he said.

Among the names doing rounds for the post are former State Congress President Sarat Patnaik is the front runner and and AICC General Secretary Bhakta Charan Das is also in the reconing.

However Sarat Patnaik is the most favorite of AICC and his loyality to Gandhi Family is his tump card, said a AICC Secretary.

“We will support whoever the AICC chooses for the post,” Mr.Moquim said.

Mr.Das said that he has the experience of serving as the party’s in-charge of Bihar, Manipur and Mizoram.

“I do not think that party will spare me. Anyway, Odisha is my native place and I will not hesitate to any responsibility given by the AICC,” he said. 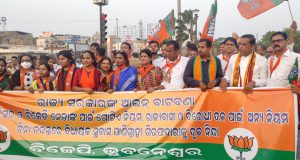