Mr. Sahu renewed the old and one of the best songs from Odia movie Dharitri. He sang it very beautifully and the music is also at its best.

He gave a brilliant performance and is quite successful in creating an ambience of patriotism on the 75th I Day. He made listeners soak into patriotic fervour, while listening the song.

Satyabrata has already sung more than 30 Odia Bhajans on several occasions like Rath Jatra and Maha Shivaratri like a professional playback singer.

On Rath Jatra, his Bhajan songs on Shree Jagannath were released.  On 14 June, on the auspicious occasion of Debasnana Purnima, Mr. Sahu’s Bhajan titled ‘Thaau Re Kalia ThaauTo Snahana Setiki Thhau’ was released.

On 2 February, for the first time, Mr.Sahu had sung the famous Odia Bhajan Jagannatha Ho Kichhi Magunahin Tate. The bhajan gives a divine-like feeling to the listener, even though the song has already been sung by famous singers like Late Bhikari Bal, Namita Agrawal, Arabinda Muduli.

Satyabrata’s style is unique and his heartfelt as well as emotional offerings to the Lord Jagannath is remarkable, opine experts in Music Industry.

Prior to that, Mr.Sahu, serving as Principal Secretary School & Mass Education sang for Mo School Abhiyan.

The Additional Chief Secretary sang on Mo School Abhiyan, which was applauded across the State..

Even though being a senior bureaucrat his passion for singing bhajans is unmatched. Mr. Sahu takes time on holidays to sing bhajans. 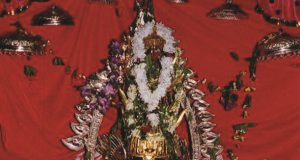