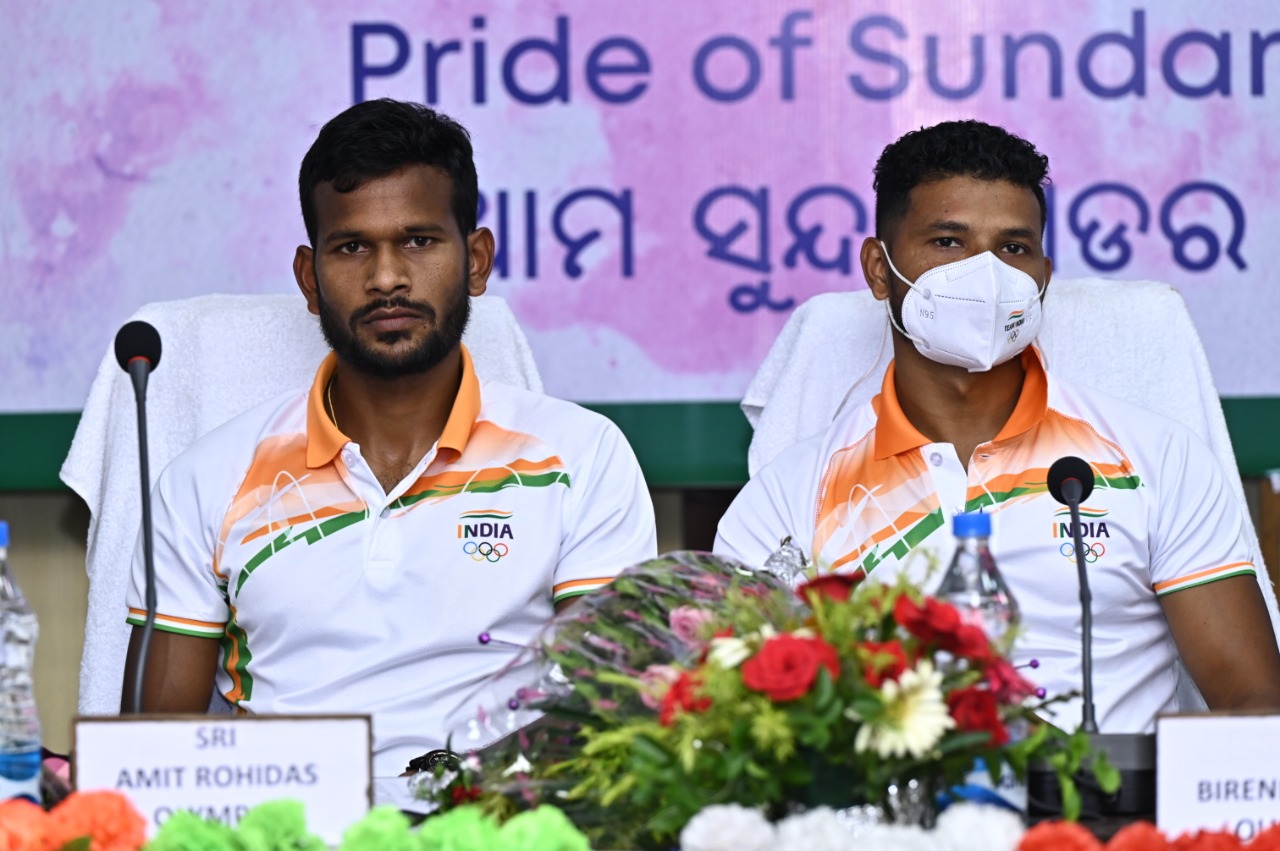 Sundargarh: Amid beats of drums, traditional tribal dance and cheers, four hockey players from Odisha, who were part of Indian hokey teams for Tokyo Olympics were given a rousing welcome at their home town Sundergarh.

The four hockey players Amit Rohidas, Birendra Lakra, Deep Grace Ekka and Sunita Toppo, returned their native villages in Sundergarh district of Odisha on Saturday, after their stupendous performances in the Tokyo Olympics.

Rohidas and Lakra were represented the men’s hockey team while Ekka and Toppo were in women’s team. Accompanied by former captain of the Indian hockey team Dilip Tirkey, the players reached Veer Surendra Sai Airport at Jharsuguda around noon today.

The officials of the Sundergarh district and Sports Department welcomed them at the airport and took them to their home town Sundargarh, a distance of 22 km, in a special carcade.

A procession was taken out in the district town from Parijat Park to Circuit House. Several vehicles and two-wheelers decorated with flowers and Indian flags were part of the procession.

A large number of people come out to the street and welcomed the players with great enthusiasm. The players were felicitated at different squares on the route. Later, the district administration has felicitated the stars at Bikash Bhawan in the town.

“I am feeling very happy. A large number of people have come to welcome us. My family has also come to receive me. I cannot express my feelings with words,” said Rohidas. He said the junior hockey players will be inspired with this, he said.

Deep Grace Ekka also expressed her happiness after receiving such a grand welcome in her district. “We have started playing in this place and today such a large crowd has come up to welcome us. It is a very moment for all of us,” she said.

As per his earlier announcement, Chief Minister Naveen Patnaik had given cash awards of Rs 2.5 crore along with DSP rank posting to each of Birendra Lakra and Amit Rohidas. Deep Grace Ekka and Namita Toppo, who were part of the Indian women’s team, have been given Rs 50 lakh each.

On August 17, the State Government has felicitated the both men’s and women’s hockey teams in Bhubaneswar during a special programme. The Chief Minister has been the sponsor of both teams since 2018 and recently announced to support for another 10 years.

Tathya Correspondent - November 21, 2021 0
Bhubaneswar: With just two days to go for the Hockey Men’s Junior World Cup, almost all the participating teams have arrived in...