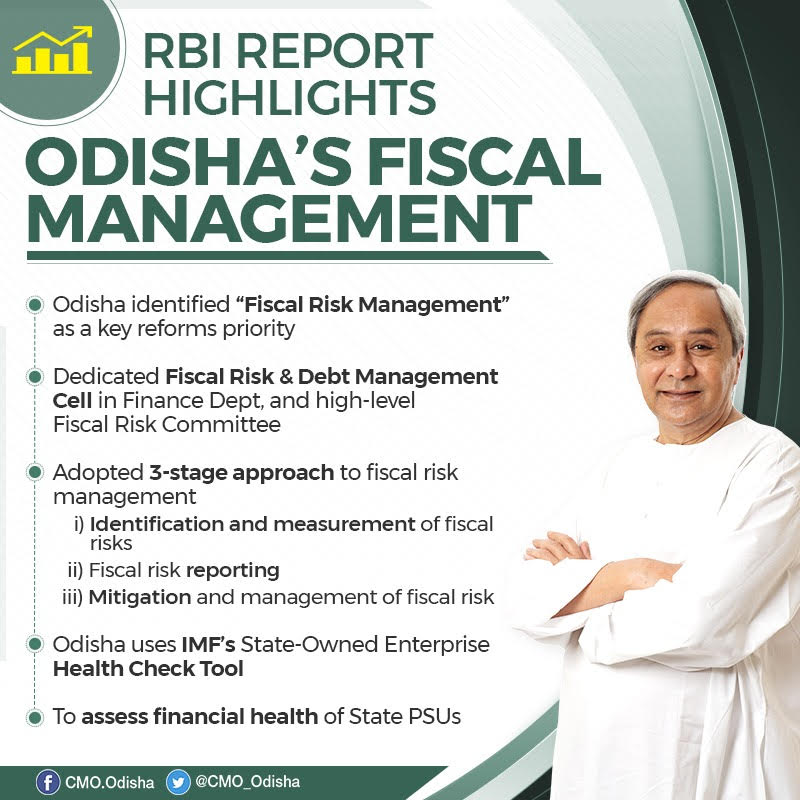 Reserve Bank of India (RBI) has appreciated the efforts of Odisha Government in taking up reforms in Financial Management, which is yielding positive results for the State and coming to its rescue in a crisis period like COVID-19.

Latest Report on State Finances and Experience of Odisha released by RBI pointed out that the Government of Odisha identified -Fiscal Risk Management” as one of the key reforms priority under technical assistance from the IMF South Asia Regional Training and Technical Assistance Center (SARTTAC) in 2019.

All possible sources of fiscal risk were identified and the impact of each fiscal risk worked out as ratio of GSDP and classified as high, medium and low on the basis of the level and possibility of occurrence.

Some of the identified sources of fiscal risk include, macroeconomic performance, international commodities prices, and exchange rate risk, particularly for foreign currency loans, natural disaster to which Odisha is prone and composite debt risk measured through a debt index consisting of debt to GSDP ratio, per capita debt and cost of debt using the relative distance methodology.

The overall fiscal risk measured through a fiscal performance index employing a multiple indicator approach; and contingent liabilities risk from Guarantees, Public Private Partnerships (PPPs) and public sector undertakings (PSUs)
The State Government also used the IMF’s State-Owned Enterprise Health Check Tool to assess the financial health of the State PSUs Such assessment of GRIDCO, a state-owned enterprise in power sector shows it a high risk company.
Fiscal risk reporting, critical for transparency and public disclosure, is envisaged through a two-stage approach.
First, a Fiscal Risk Register as part of the Mid-year Fiscal Strategy Report identifying the sources of fiscal risks.risk exposure and likelihood and severity of risk materialization is put in place.

Secondly a Fiscal Risk Statement to be released along with Annual Budget documents would incorporate all possible fiscal risks for the state in quantified terms. This statement would be a part of the disclosure that the government intends to bring out, starling from the financial year 2021-22.
Mitigation and Management of Fiscal Risk is the third aspect as part of which a high level Fiscal Risk Committee headed by the Principal Secretary Finance was set up by the State Government.

It has already put in place mechanisms for management and mitigation of some of the major fiscal risks such as creation of State Disaster Response & Mitigation Fund (SDRMF) an administrative ceiling on government guarantees and constitution of a Guarantee Redemption Fund (GRF) for the fiscal risks arising from government guarantees and institution of a Consolidated Sinking Fund (CSF) to mitigate fiscal risks arising from amortization and foreign currency fluctuations.

Over the years, the Government of Odisha has built up a sizeable CSF (about 15 per cent of state government liabilities) and GRF (about 25 per cent of total guarantee exposure).
As a part of fiscal risk management measure for COVID-19 crisis, the state would utilize a portion of the CSF for amortization of the entire open market borrowing during 2020-21.
Going forward, the state intends to broad-base coverage of these funds and uses them to address likely fiscal stresses in future, pointed out RBI.

Tathya Correspondent - February 24, 2021 0
Bhubaneswar: State Government has expressed serious concern over poor lending by the commercial banks in the State and asked to go for...