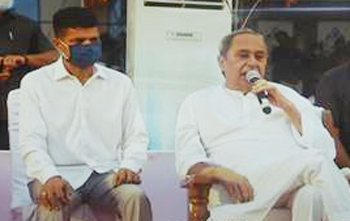 Speaking on the occasion, the Chief Minister said, “This is a historic day for Puri district. I hope that, with the efforts of the teachers and students, this institution will get a great name in serving the people of Puri.”

Expressing his elation at the event, Mr.Mandaviya, who was on VC, said that the hospital will play a pivotal role in training doctors and providing good medical facilities to the people of Odisha.

He interacted with the students who will be part of the inaugural batch of the hospital and motivated them to work hard and serve in the remotest corners of the country so that healthcare can reach to the last mile.

The Health Minister highlighted that the vision of New India as envisaged by the Prime Minister is to make healthcare accessible and affordable for all people.

He further requested the Chief Minister to integrate Ayushman Bharat Yojana with the existing state health facilities to further improve the access to healthcare in India.

All the hospitals under the scheme have been built at an approved cost of Rs 945 crore with 60 per cent contribution (Rs 567 crore) from the Centre. With the inauguration of this institution, all five medical colleges have become functional now.

Under Phase II and III of the scheme, two more hospitals in Jajpur and Kalahandi districts of Odisha has been approved. Central share of Rs 150 crore and Rs 100 crore respectively has been released to the State government for the two new medical colleges.

The medical college has started functioning with health facilities of the District Headquarter Hospital (DHH), Puri. A 650-bedded teaching hospital is under construction by the State government. This medical college and hospital will provide quality health care services to the people of Puri district and also to a large number of tourists visiting Puri town.

Another student Bhatta Hembram from Mayurbhanj also interacted with the two leaders. He comes from a very poor tribal family in a remote area of Mayurbhanj. His parents are daily labourers with a large family of 8 children.

With grit and determination, he achieved his dream of admission in medical college. He also thanked the State government for the quota for the government school students.

In his interaction with the students, Mr.Mandaviya motivated the students to work for the rural population and provide the best of health care for the poor patients