Bhubaneswar: With Odisha Government hardening the stands on Banking Sector, banks have not only extended more credit to the people, Credit Deposit Ratio imbalance has been corrected and Odisha has performed much better than National Average so far CD Ratio is concerned.

Vishal Dev, Principal Secretary Finance has appreciated the efforts of the banks and said that during Financial Year-2021-22, the achievement under Annual Credit Plan has been increased to 93.06% as compared to 88.39% of FY 2020-21. Interestingly for the first time total Priority sector loan disbursement crossed the landmark of Rs.1 lakh Crore.

Mr.Dev was addressing the State Level Bankers’ Committee (SLBC) meeting here on 23 June. He said so far achievement of ACP has gone up to Rs.1,03,000 Crore during 2021-22, while during 2020-21 it was Rs.78,000 Crore. State Government had harped on more credit facility for the genuine loanees and banks have responded in a positive manner, for which such an huge jump has been recorded in achievement of ACP.

Similarly Credit-Deposit Ratio was dismal and after looking at the fact sheet, Principal Secretary Finance, Mr.Dev impressed upon the bankers for improvement of poor CD Ratio, which has been improved to a large extent.

Since Mr.Dev has taken over as Principal Secretary Finance, he has been harping on Financial Inclusion in an effective way and thrust is on strengthening and streamlining the Banking System.

While the State Government is insisting on setting up brick and mortar branches, the Department of Department in consultation with RBI, NABARD & SLBC has identified 200 Gram Panchayats (GPs) based on population ensuring parity among districts to open Brick & Mortar Branches on priority basis by 31 March 2023.

Accordingly, more Members of SHGs are allowed as BC agents in the state and they are helpful to cater people in far flung areas, where banking service is not available, admit officials.

He has asked all banks to ensure completion of MOU signing with Mission Shakti Department for engagement of WSHG members as BC agents.

Principal Secretary Finance Mr.Dev has advised that all districts in Odisha should be included in the ongoing campaign of 100% digital payment ecosystem.

He advised Union Bank of India (Ganjam district) & Punjab National Bank (Sambalpur District) to ensure that their allotted districts reach the target of 100% digitization well ahead of the dead line.

Mr.Dev harped on clearance of pending applications for availing credit facilities and asked the banks for timely action in this regard.

High level of pendency of applications at bank level is a major cause of concern for the applicants and delay in clearance of the applications was insisted by the Principal Secretary Finance.

While there is improvement in clearance of applications, more timely action is needed in this regard. 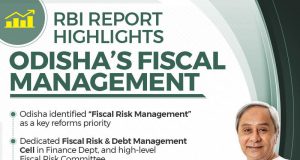 Tathya Correspondent - October 28, 2020 0
Reserve Bank of India (RBI) has appreciated the efforts of Odisha Government in taking up reforms in Financial Management, which is yielding...