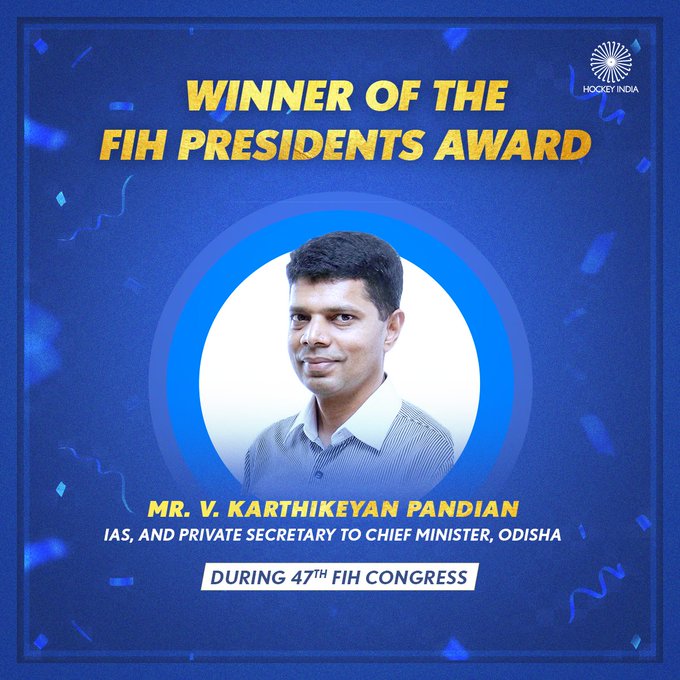 Bhubaneswar: Top Mandarin V Karthikeyan Pandian, Secretary to Chief Minister has been honored in a big way by the International Hockey Federation (FIH) for his huge contribution for the promotion and development of Hockey in Odisha.

FIH in its 47th Congress on 22 May conferred with the prestigious Presidents Award to Mr.Pandian.

On this event, the Hockey India has congratulated Mr.Pandian for the award, stating that it’s a well-deserved acknowledgment for his outstanding contribution and services to Hockey in Odisha.

While Odisha organized 14th Edition of Men’s Hockey world Cup in 2018, , Hockey India and the Odisha Government are gearing up to host the 2023 Men’s Hockey World Cup.

In 2023, India will host the competition for a record fourth time since its inception in 1971.

The tournament is slated to be held in Bhubaneswar and Rourkela from 13-29 January 2023.

When India hosted the 14th edition of the World Cup in 2018, all the matches of the competition were held at the Kalinga Hockey Stadium in Bhubaneswar.

However to promote Hockey two Stadiums are chosen and an ultra modern Hockey Stadium is coming up in Rourkela, thanks to overdrive of the Top Mandarin.

Tathya Correspondent - August 5, 2021 0
Bhubaneswar: Chief Minister Naveen Patnaik, who himself was a hockey player during his schooling time, was feeling happy with the victory of...