Bhubaneswar: Odisha Government has directed the officials to procure Organic Compost from the ‘Wealth Centers’ of the Urban Local Bodies for their use instead of procuring from Open Market.

Mr.Mathivathanan has informed the Secretaries of the Departments of Agriculture, Panchayati Raj, Forest & Environment, SC ST Development, Handloom Textiles and Handicrafts that the Urban Local Bodies of the State are processing the Municipal Solid Waste in decentralized manner through the ‘Wealth Centers’.

The Biodegradable Wastes are processed in MCCs and converted to Organic Compost named as ‘Mo Khata’, which is being sold by UILBs @Rs.20 Per KG.

‘Mo Khata’ is the product of the ULBs made in partnership with the Community Based Institutions, like Mission Shakti, Transgender Groups, and revenue generated out of this endeavor flows back to Community.

Those are given in form of wages, incentives, honorariums for Swachha Sathis, Swachha Supervisors, Swachha Karmis, who are the Members of the Mission Shakti Groups, Transgender Groups, Rag Pickers working in ‘Wealth Centers’.

This also meets the Operation and Maintenance of ‘Wealth Centers’ as well as also meet the cost of maintenance of the whole sanitation value chain by the ULBs.

Accordingly, the State Government has decided that all Government and Parastatal Organizations shall have to procure ‘Mo Khata’ from the concerned and nearby ULBs to meet their requirement of manure to support larger social cause at a cost of Rs.20 Per KG.

The State Government has clearly stated that procurement from Open Market or Private Dealer shall be permitted only where the concerned and nearby ULBs will not be able to meet the demand.

Recently, in a significant step towards solving the problem arising out of the grounding of dumping yard in Bhubaneswar Municipal Corporation (BMC) area an exclusive outlet Mo Khata at Smart Janpath in Bhubaneswar had been also opened.

In fact the ‘Micro Compost Center (MCC) initiative has resolved the problem of dumping yard and is also providing bio- fertilizers to the denizens of the Capital City at affordable prices.

The initiative also creates employment opportunities of WSHGs and local youth. It will be expanded to the other urban bodies in phases.

This is a sustainable waste management technique which while reducing the burdens of dumping on the land will also reduce the carbon footprints in the urban areas.

It may be pertinent here to say that under the initiative, the organic or wet waste is being processed in Micro Composting Centers using ‘enzyme solution’ and converted to compost-manure. Mo Khata kiosks are being run and managed by Swachha Sathis.

This is a high-quality compost.  The compost will be of great help to farmers who are now turning their attention to organic farming.

Available data shows, Bhubaneswar generates over 520 tons of waste every day. Out it, around 250 tons is wet waste. Quantity of garbage collected daily requires 45 days of processing for conversion to compost.  It is estimated that with operationalization of all 43 MCCs in BMC, the city waste can produce nearly 50 tonnes of compost per day.

The Civic Body is also running a campaign to generate awareness on door-to-door collection of garbage and segregation waste at the source. The garbage collection vehicles will have separate bins to collect biodegradable waste and other waste from the source. 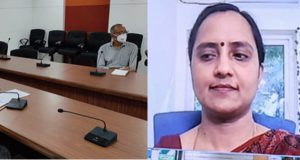 Tathya Correspondent - July 15, 2021 0
Bhubaneswar: To strengthen the partnership of Mission Shakti SHGs in urban initiatives, a virtual meeting was held jointly by the Housing &...