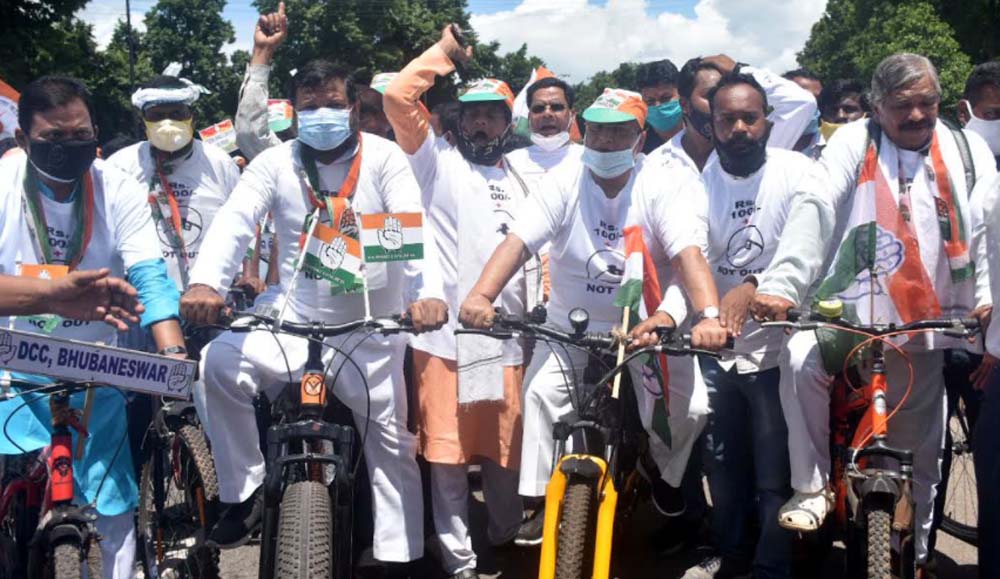 Bhubaneswar: Price hike of fuel witnessed agitations and rallies by opposition BJP and Congress while ruling BJD started consultation within the party over issues hitting the public.

The Congress workers led by Odisha Pradesh Congress Committee (OPCC) president Niranjan Patnaik held a cycle rally protesting the price hike of the fuel while the BJP activists launched a week long state wide stir against the rise in the electricity tariff.

Calling the BJP led NDA government as anti-people, OPCC President Niranjan Patnaik said: “For the first time since independence, a government has deliberately let petrol price cross Rs 100. This is unbearable during the time of pandemic.”

He said the Congress is the voice of the common man on the streets by staging the cyclone rally. The fuel price hike has also led to the rise in the price of all essential commodities across the country. The poor people of Odisha are badly hit in the process, he said.

OPCC working president and former MP Pradip Majhi said that his party would raise the issue in a big way in the Parliament. “This is not at all acceptable in a welfare state. There is no reason to collect taxes from people in the name of fuel price,” he said.

The Congress women activists also raised slogans against the Prime Minister and held him responsible for the burden on the poor and middle class housewives who find it very difficult to run the families.

The Congress leaders also ridiculed Odisha Chief Minister and BJD president Naveen Patnaik for remaining swilent over the price hike of fuel. They alleged that BJD was hand in gloves with the BJP for which the ruling party is reaming silent, said Majhi.

The OPCC president also appealed to the people to fully support the left party’s  Odisha Bandh on Thursday, The Congress has been supporting the bandh call which is held in protest againstthe price hike of essential commodities, he said.

Meanwhile, the BJP president Samir Mohanty said the party has launched a weeklong agitation before all the electricity offices across the state for the recent tariff hike. They alleged that the there has been a hike of 50 paise per unit of power consumption in the state in two phases within a gap of six months.

Even though the state government has assured the Odisha Assembly that it will write to the Odisha Electricity Regulatory Commission (OERC) following a raise of 20 paise per unit in April this year, the government remained silent which encouraged them to further raise the tariff by another 30 paise per unit, said Mohanty.

“At a time when other states are charging Rs 4.80 per unit from domestic consumers, Odisha is charging Rs 5.70 per unit for the same. The Central funds are being misutilised here. We demand the State government to withdrew the hiked power tariff immediately,” said Bhrugu Baxipatra, State BJP vice-president.

Meanwhile, the youth wing of the BJP announced that its members would hold candle rally across the state protesting the power tariff hike in the state.

As both the opposition parties are on the streets, the ruling BJD leaders held parleys among themselves over the silence of trhe party supremo and awaited a specific direction from the Naveen Niwas, party insiders said.

Some leaders feel that if the BJD remained silent on the fuel price hike, a general message will go to the people that the regional outfit was one with the BJP government at the centre, a senior leader said.

Chief Minister Naveen Patnaik on Wednesday talked to several leaders and MLAs on party affairs and suggested them to remain with the people during the pandemic period. However, there was no word from the party president on the fuel price hike whgich has been hitting the common men, said one of the participants of the meeting

Free Vaccine For All

Tathya Correspondent - October 25, 2020 0
Amidst the demand by opposition parties in the country for COVID-19 vaccines and not only in poll-bound Bihar as announced by the...