Cuttack: With World Class Sports Infrastructure made available in a big way, Odisha has turned as “Temple for Sportspersons”, said former Minister and President of Odisha State Fencing Association, A U Singh Deo.

The growth of Odisha as a Sports Hub or the Sports Capital did not happen overnight, but strong efforts have been made over years, since Mr.Patnaik has taken over as Chief Minister of Odisha.

Mr.Singh Deo said now sportspersons are feeling at home in Odisha as it has turned as “Temple for Sportspersons”

Mr.Singh Deo said earlier sword fighting, the ability to fight with the sword was essential in all warriors. Now Fencing has turned out to be a good game and youth are attracted to this interesting game in a big way.

These days, fencing is considered a very good sport and in the Olympic Games, said former Minister Mr.Singh Deo.

Nearly 800 Sportspersons both boys and girls from 27 various States across the Country will participate in the competition.

In today’s meeting 17 District Association Representatives participated in the deliberations.

Several Committees have been formed and all arrangements are being made for the players, who will be reaching here for competition.

Department of Sports and Youth Services, Government of Odisha  is extending all out support for the competition, said Mr.Purohit. 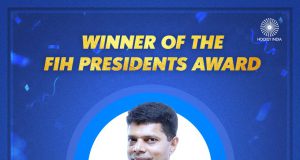 Tathya Correspondent - May 22, 2021 0
Bhubaneswar: Top Mandarin V Karthikeyan Pandian, Secretary to Chief Minister has been honored in a big way by the International Hockey Federation...