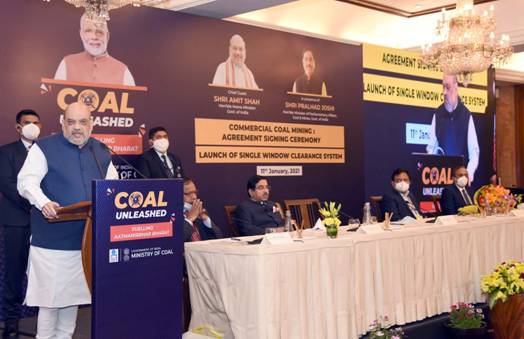 With fierce competition in the auction, the highest premium remained at 66.75Percent and the average premium at 27PC.

These mines are spread over 05 states Odisha, Madhya Pradesh, Chhattisgarh, Jharkhand and Maharashtra and have consolidated Peak Rated Capacity (PRC) of 51 Million Tonnes Per Annum (MTPA).

Presently, about 19 major approval or clearances are required to be obtained before starting a coal mine in the country.

Some of them include approval of Mining Plan and Mine Closure Plan, Grant of Mining Lease, Environment and Forest Clearances, Wild Life Clearance, Clearances related to Safety, Environment, Rehabilitation of project affected families, welfare of workers etc.

These approvals or clearances are granted either by central or state governments. In the absence of a unified platform for grant of clearances/approvals for starting of a coal mine, the project proponents are required to approach different administrative ministries and Government departments separately to apply for the requisite clearances leading to delay in operationalization of coal mines.

Now, the complete process shall be facilitated through Single Window Clearance Portal, which will map not only the relevant application formats, but also process flow for grant of approval or clearances.

The Mining Plan module of the portal was launched  on Monday and the modules related to other clearances will be added in phases.

The success of India’s first ever commercial mining auctions will pave the way for the Aatmanirbhar Bharat as it will help reduce India’s coal import by about 20 Percent.

SBI Capital Markets Limited, sole Transaction Advisor to Ministry of Coal for the Commercial coal mine auction, had devised the methodology and assisted Ministry in conduct of the auction.

“I appeal to all states to facilitate the opening of all these mines so that India could make use of its abundant coal resources. It will help our nation become Aatmanirbhar in Coal,” Mr.Joshi said.

Mr.Joshi also said that based on the experience of various mineral rich states and feedback received from the stakeholders, the government will also bring out structural reforms in the mining sector. These reforms will generate huge employment opportunities and increase the production of minerals leading to self-reliance.

Tathya Correspondent - August 18, 2021 0
Bhubaneswar: The Mines Ministry has adopted a scheme for accreditation of private exploration agencies to undertake prospecting operations of minerals.