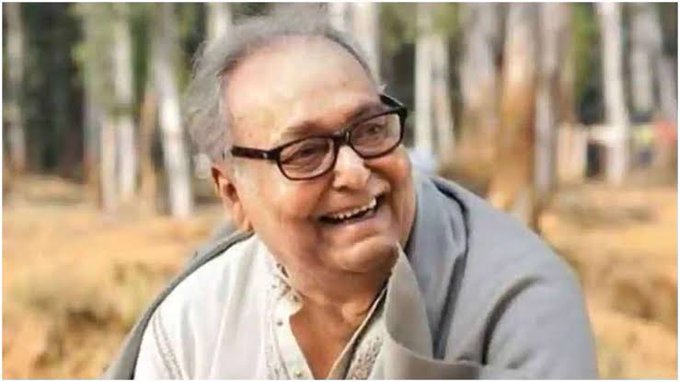 Union Minister Dharmendra Pradhan also expressed his grief over the demise of the Bengali action.

Immortalized in his on-screen portrayal of #Feluda & timeless collaborations with the legendary Satyajit Ray, he leaves behind a great legacy.“

Hon’ble Governor is deeply saddened to know about the demise of doyen & most celebrated Bengali actor and Dada Saheb Phalke Awardee #SoumitraChatterkjee. ‘He will always be remembered for his stellar roles and association with iconic director Satyajit Ray & others,’ he expressed,” a twitter post of Governor Odisha said.

In passing away of Shri Soumitra Chatterjee, the world of art has lost an illustrious thespian. The cultural world is poorer today by this loss. Deeply saddened by his demise. My condolences to his family & well-wishers. Om Shaniti,” Pradhan said in his twitter post.

Earlier in the day, Soumitra Chatterjee passed away at a hospital in Kolkata on Sunday at the age of 85.The actor was admitted to the hospital on October 6 after he tested positive for the infection. He was later shifted to ICU as COVID encephalopathy set in, affecting his central nervous system and causing renal dysfunction.

He recovered from the infection, but his health condition did not improve, despite several plasma therapies, dialysis and tracheotomy. Prime Minister Narendra Modi also condoled the death of Mr.Chatterjee and said his demise is a colossal loss to the world of cinema, and cultural life of West Bengal and India.

“Shri Soumitra Chatterjee’s death is a colossal loss to the world of cinema, cultural life of West Bengal and India. Through his works, he came to embody Bengali sensibilities, emotions and ethos. Anguished by his demise. Condolences to his family and admirers. Om Shanti,” Mr.Modi said.