Daughter In Laws played a major role in taking care of the ailing Father In Law. They are Anuja Mohapatra. Bidyutprabha Mohapatra, Tulisikha Mohapatra and Smrutichhanda Priyadarshini.

Mohapatra continued his literary pursuit and used to write for several popular magazines and authored several books. He was also associated with Odisha Doordarshan for various developmental work for promotion of Odia literature.

His writings were very popular among the children and it used to ignite their mind with positive energy. For his quality writings, he has been honored by Sishu Sahitya Sansad, a leading organization for promotion of child literature.

In a tragic incident 2010 he suffered spinal injury and was taken care by his family, which stood by him in his darkest hours.

With utmost care and affection of his sons, daughter, daughter in laws and son-in-law, he survived for long.

Ceremony was organized with COVID Protocol and all his family members were by his side during all these days. 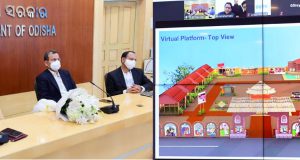 Tathya Correspondent - January 20, 2021 0
Bhubaneswar: In a bid to take the famous Adivasi Mela beyond State and national boundaries, the Department of SC and ST Development...