The Chief Minister has raised the demands during the LWE meeting held under the chairmanship of Union Home Minister Amit shah here today.

Naveen urged Shah for four laning road NH-326 from Jeypore to Motu via Malkangiri. This will provide a parallel road for traffic from eastern India, Chhattisgarh and Jharkhand States to the South, especially Bangalore and Hyderabad, he said.

This corridor in addition to reducing the traveling time substantially will also provide huge economic impetus to this region, he said.

Stating the LWE affected districts are not part of the Railways network, the CM said the Railway Ministry and Odisha Government are already constructing two-legs – from Jeypore to Nabarangpur and Jeypore to Malkangiri — through cost sharing.

“The missing part between Malkangiri to Bhadrachalam of length 153 KM and Nabarangpur to Junagarh of length 118 KM can provide a very viable alternative path to the trunk routes of the railway. This will have a huge impact on the economic growth of these areas,” he proposed.

Speaking about strengthening mobile connectivity to areas of southern and western Odisha, the Chief Minister said there are 6278 villages in Odisha without any mobile access or connectivity, the largest number in the country.

“We thank the Union Home Ministry for sanctioning 488 mobile towers for Odisha recently. But to provide coverage to other uncovered villages, an estimated 2000 more mobile base stations will be required,” he said.

It is also pertinent that most interiors depend on mobile connectivity and mobile internet for banking, education and delivery of all Government services. Today, the basic need, therefore, is for 4-G mobile base stations at all places. It is, therefore, required to upgrade the 2-G base stations also, erected earlier, Patnaik pointed out.

“We have not been successful in creating banking facilities in these areas. The State Government will provide land, building etc for setting up bank branches free of cost. I would urge the Union Government to take expeditious steps to set up banks within a specific time frame of one year or so,” the CM further told the Union Home Minister.

The CM requested the MHA to do a study on how many children from these LWE affected areas across the country are successful in national level exams like NEET, IIT JEE etc. “If our systems continue to bypass these areas it is not going to help the cause of people of LWE affected areas,” he said.

The State Government commitment will continue with our pro-active security strategy combined with sustained and holistic development of tribal areas to address the issue of left wing extremism, he assured. 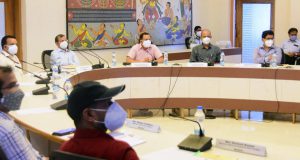