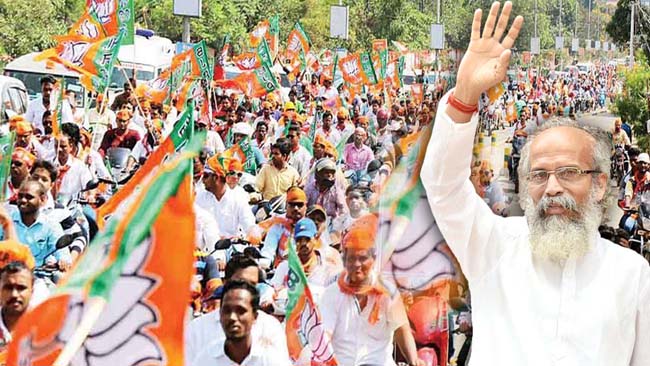 Exactly a month from today, Odisha will witness two bypolls, one in Balasore Assembly segment and another in Tirtol of Jagatsinghpur district. It appears the bypoll to be Pratap Sarangi aka Nana Vs Naveen Patnaik in Balasore and in Tirtol a triangular contest is likely. In the bypolls there is no TINA (there is no alternative) factor, but there is NANA factor in Balasore contest.

All the three major political parties – BJD, Congress and BJP are ready, but the bypolls coming 18 months after the 2019 general elections, is crucial for both the ruling BJD and the Opposition BJP.

The two seats are equally divided between the BJD and the BJP. While BJP candidate Madan Mohan Dutta won the Balasore seat in 2019 polls, BJD’s Bishnu Charan Das got success at Tirtol. Both the sitting MLAs, however, passed away necessitating a bypoll.

However, the political situation of 2019 has changed in October-November of 2020. While BJD continued to rule Odisha, the BJP has emerged as the principal opposition party in the state and the grand old Congress party is pushed to third position. There should be no doubt that the BJP has replaced Congress and marches ahead in the state and in many places gives a challenge to the ruling regional party headed by Naveen Patnaik.

BJD and the BJP, though locked in a big fight during the 2019 general elections, have closed their ranks in the last 18 months prompting Congress to call them “two sides of the same coin.” The BJD has given Rajya Sabha seats to BJP during the time, creating a situation where the people consider that their votes to the regional party have been shifted to the BJP. However, the BJP, despite getting much support from the BJD, continues to attack the regional party, only choosing to keep mum on select issues.

Balasore, where the bypolls will be held on 3 November, has also witnessed a lot of change. Its MP Pratap Sarangi nee Nana is now all powerful after becoming a Minister of State in the Narendra Modi Council of Ministers. Though BJP candidates won in 8 Lok Sabha seats, Modi picked up Sarangi alone for the ministerial berth overlooking state President Basant Panda, veteran Sangeeta Kumari Singh Deo or the bureaucrat turned politician and Bhubaneswar MP Aparajita Sarangi. Modi even dropped Sundergarh MP and his former colleague Jual Oram to create space for Sarangi. Therefore, he has become powerful and not less important in Balasore in comparison to another Union Minister Dharmendra Pradhan.

In Balasore assembly bypolls, Nana will play a crucial role as he had secured about 30,000 more votes from the segment than his BJD rival Rabindra Jena. The difference between Madan Mohan Dutta and Jiban Pradip Das of BJD was above 13,000 votes in the 2019 assembly elections. This apart, BJP is not in a bad position in Balasore Lok Sabha segment limit. Of the 7 Assembly segments under Balasore Lok Sabha seat, five are with BJD while BJP bagged two others. The saffron party candidates had won in Balasore and Nilagiri segments, both the seats were under the leadership of Sarangi.

The future of BJP in the Balasore assembly bypoll, therefore mostly depends on the leadership and popularity of Nana. Modi has already given credit to him for winning the Balasore Lok Sabha seat and also two Assembly segments like Balasore and Nilagiri. Now, it is testing time for him. If BJP retains Balasore Assembly segment, he may get elevation and his clout will increase. However, he is pitted against the mighty BJD headed by Naveen Patnaik.

Nana has an edge because Naveen is unlikely to go for campaigning in Balasore bypolls due to COVID-19 scare; while the Union minister has already started operating from the ground. Naveen may address the people of Balasore through virtual platforms making the polls grass root level campaign vs virtual campaign. Recent CBI raids on BJD leaders’ houses and opening up of the chit fund investigation may favour BJP. Late Dutta had properly capitalized on the chit fund issue during the election campaign in 2019. Therefore, the party will also utilize the same strategy and may target BJD leaders. BJD will certainly deploy all its resources to snatch the Balasore seat from BJP. However, BJD has a problem that the party has two parallel organizations in the district, one led by Rabindra Jena and another by Jiban Pradip Das. But a strong command from Naveen will bring them together to work in tandem to ensure victory of the ruling party candidate.

Political analysts, however, observe that the people of Balasore are not the voters of Kendrapara. BJD could ensure defeat of Baijyant Panda and made Anubhav Mohanty win the Kendrapara Lok Sabha seat, solely due to Naveen’s charisma. Similarly, rank outsider, Sashi Bhusan Behera also won the Kendrapara Assembly seat. However, the situation is totally different in Balasore. The voters in this part of the state give vote based on their conscience and are not emotionally bound to BJD as in Kendrapara.

In Tirtol, the ruling BJD is comparatively in better position than the BJP. This is because Tirtol is a reserved seat and was in the hands of BJD. Here Congress may give a good fight to BJD as powerful Biswals (Late Basant Biswal’s family) have a better stake in Tirtol.

BJP has also gained strength in Jagatsinghpur and here Union Minister Dharmendra Pradhan is likely to extend his mite. Therefore, BJP will be able to give a better fight than 2019, as there are enough resources. The fate of Congress in Tirtol depends on the resources utilization. If Congress, which remained out of power for two decades, could not match the BJD, it might not come up to fighting level. However Tirtol is slated for a triangular fight.

With only 30 days left for the by-elections, many changes may take place. What is certain is that the Balasore fight is going to leave its impact on BJP. If the saffron party loses the seat, it would be a big blow to the party as well as to Nana. If BJP wins, it will not bring much difference for BJD. But, it may give a wrong message to the public. Naveen has so far won in most of the bypolls during the two decades.