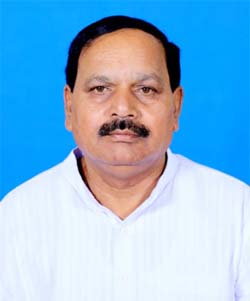 Bhubaneswar: The noisy protests in the Odisha Legislative Assembly over alleged mismanagement in paddy procurement turned ugly on Friday when an agitated BJP member made a suicide bid by attempting to consume sanitiser in the House.

As the opposition BJP and Congress members had stalled proceeding of the house during pre-lunch session, Speaker S N Patro had asked the Minister to give a statement in the house.

When the house reassembled at 4 pm and the Minister was reading the statement, Mr.Panigrahi rose from his seat and took out a bottle of sanitizer from his pocket which he tried to consume.
BJP Member Kusum Tete sitting near him first prevented the Deogarh MLA from drinking sanitizer and subsequently Parliamentary Affairs Minister Bikram Kesari Arukh and the Government Chief whip Pramila Mallick intervened and snatched away the sanitizer bottle from the MLA.

In his reaction, Mr.Panigrahi said, “I had threatened earlier to immolate myself over the issue. Still State Government did not pay any attention towards the farmers problem who are facing difficulties in selling their paddy in mandis.

“As people in my constituency are threatening to commit suicide before me, I decided to do so by drinking sanitizer in the house.”

He said even as the State Government has been making tall claims that it is doing a lot for the farmers, the reality on the ground level is totally different.

“I had no option than taking this extreme step,” Mr.Panigrahi said.     Mr.Panigrahi was immediately examined by the doctor who said that the health condition of the MLA is good and stable.

“I am well now,” the BJP MLA said.     However, senior BJD Member from Bhograi in Balasore district, denounced the action of Mr.Panigrahi.

“This act of a lawmaker is not acceptable,” the BJD MLA said.

Earlier, on the opening day of the second  phase of Odisha Assembly’s budget session Friday witnessed noisy protests by the opposition BJP and Congress members over alleged mismanagement in paddy procurement across the state.

Members of both the opposition parties rushed to the well of the House as soon as it assembled for the question hour at 10.30 over the issue.

The second leg of the budget session of the Assembly will continue till April 9.

“We will not allow the house to function till paddy are procured from farmers at different mandis across the state. The Speaker should give a ruling for immediate paddy procurement,” said Congress Chief Whip Taraprasad Bahinipati outside the house.

“The Government has cheated people and the opposition by not lifting the paddy from different mandis despite a decision taken in the all party meeting during the first phase of the budget session,” Congress Legislature Party leader Narasingha Mishra said.

The BJP members also raised the same issue and joined the Congress members in staging agitation in support of the demand for immediate procurement of paddy in different mandis.

They alleged that the state Government has not taken any step to address the concerns of the farmers.

The Minister in his reply, however, defended the State Government and claimed that it has procured more paddy from farmers this time than the previous year.

“Steps are taken to procure paddy from all the registered farmers,” the Minister said adding that inquiries are going on over the allegation of irregularities in paddy procurement process in different districts.

The Odisha unit of the BJP has already launched an agitation in the western districts protesting the introduction of token system in the paddy procurement procedure.

The eligible farmers are given a token from the State Government which will allow them to sell paddy in mandis.

BJP Member from Sambalpur Jai Narayan Mishra alleged that the mandis do not lift paddy even though the farmers are provided a token.

They have to wait for a long period to sell their produce, Mr.Mishra pointed out. 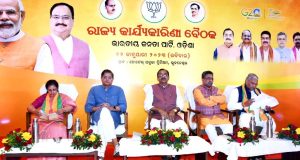 Tathya Correspondent - January 22, 2023 0
Bhubaneswar: Saffron Brigade will focus on the booth level management of activities to strengthen the party at the grassroots level even as...