Shree Jagannath Temple Administration has made elaborate arrangements for the Yajna. Due to restrictions of Covid-19, devotees across the globe can witness the Yajna online.

One can watch the live telecast of the Shilanyas Ceremony for the “Shreemandira Parikrama Project” on the Youtube on the link https://www.youtube.com/watch?v=9iHS-83o5do

Gajapati King handed over betel nut (a religious and symbolic entrust of responsibility) to perform three day Yajna. The Chief Minister is scheduled to perform Purna Ahuti of the Yajna and perform Bhumi Pujan ceremony on November 24.  Swami Nischalananda Saraswati the Sankaracharya of Gobardhan Peeth will also remain present on the occasion.

Parikrama (a seven lane wide pathway around the Meghanad prachir for devotees to circumambulate the temple) will facilitate devotees to perform circumambulation of the shrine in the heritage corridor.

There will be separate lanes for deities and devotees in the Parikrama which includes a green corridor close to Meghanad Prachir. Four security watch towers will be erected on four sides of the Parikrama. This apart, a clock room and underground parking lot will be constructed, an official said.

The RBI Governor said that he is visiting the Srimandir almost after six years. “I feel fortunate to have had darshan of the sibling deities,” Mr.Das told reporters after visiting the temple.

He said that the country had to go through a rough phase due to the COVID-19 pandemic. “We are hopeful of overcoming this period soon with the blessing of the Lords,” he added.

Mr.Das, a retired IAS officer from Odisha, has been appointed as RBI Governor in 2018 and recently, his tenure extended by three years.

The former Economic Affairs Secretary is the first Odia to be appointed in the top post of RBI. An alumnus of DM School in Bhubaneswar, he did his Masters from St. Stephen’s College, New Delhi. 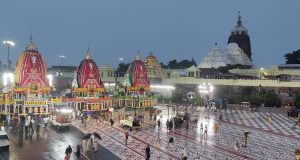 Tathya Correspondent - July 20, 2021 0
Puri: Lord Jagannath’s annual Ratha Jatra has been held in this seaside town for centuries in accordance with the unique tradition and...