SJTA Chief Administrator Krishan Kumar in a letter to NMA Member Secretary signed in Odia said: “To protect  the interest of Lords, Sevaks and Devotees at large, I request you to immediately withdraw the draft notification under reference. If National Monuments Authority (NMA) is still of the considered view that any further regulatory framework of any nature is required to protect and further the cause of “Mula Peetha” of Shree Jagannath at Puri, then you are invited for a detailed consultation & discussion with members of Shree Jagannath Temple Management Committee before any such fresh attempt is made.”

Dr.Kumar, who is an ardent devotee and understands the sentiment of lakhs of Odias, stated  that Shree Jagannath is the ‘Aradhya Devata’ of Odias and millions of Hindus across India and the world, Kumar in the letter mentioned that He is worshipped as ‘Brahmadaru’ at his Mula Pitha at Puri.

Dr.Kumar has all along worshiped Lord Jagannath from core of his heart like any other Odias, said “The divinity and worship of Shree Jagannath as the Lord of Universe is as timeless and as infinite as the cosmos itself. It is in this background of faith, religion and spirituality for millions of Hindus that any intervention by the authorities is to be looked at”.

Dr.Kumar, who has researched in details about the 12th Century Shrine pointed out that “It was to get the technical know-how of Archaeological Survey of India (ASI) for conservation of the ancient built structure that SJTMC entered into an agreement with the ASI on 22 August, 1979. This agreement restricts and codifies duties and responsibilities of ASI vis-a-vis Shree Mandira. The bare regarding of agreement indicates that importance of Shree Jagannath Temple as one of the Dhams for Hindus all over the world was given due consideration when management committee agreed to involve ASI in certain conservation works of ancient built structures,” the letter read.

Dr.Kumar, who has mingled with common men and women in the Holy Town  also noted that a large number of habitations (sahis), which are more than a millennium, exists around Srimandir. These habitations are mainly of servitors’ families, who have been rendering services to Lords since time immemorial. With imposition of restrictions, they are likely to be severely and adversely affected. They must be consulted before any process to restrict their rights is undertaken by the NMA. It may put adverse impact on continuity of rituals of Lord Jagannath at the temple, he said.

Informing the NMA about on-going projects of Srimandir in Puri, Chief Administrator of SJTA said that the State Government has acquired lands and properties for strengthening safety and security of the centuries old shrine for the project of Shree Jagannath Heritage Corridor (SJHC).

“This project (SJHC) will also provide pilgrims with facilities such as drinking water, toilets, cloak rooms and Queue Management System. These properties have been acquired by State Government through negotiations and most of the people have come forward to contribute their lands and properties for the purpose of this project.”

Dr.Kumar, who was involved in conceptualizing, planning, and executing the project from the beginning said this was possible because of deep religious and spiritual connect with Mahaparabhu of the people who own these properties. Living to realize the God through the age old tradition of Bhakta Ra Bhagwan” these people agreed to part away with their ancestral properties for the comfort of millions of devotees, who visit Puri to catch a glimpse of Mahaprabhu at Shree Mandir”, said Dr.Kumar, who feels for them and understands their pain.

“Any regulation which has the potential to restrict development of facilities and amenities on lands voluntarily contributed by the devotees of the Lord will hurt their sentiments,” Dr.Kumar wrote to the NMA Member Secretary requesting to immediately withdraw the draft application.

Puri MP Pinaki Mishra also reacted over the development and said that it is a ‘conspiracy’ by Centre to stop on-going beautification projects of the Shree Jagannath Temple as well as Lord Lingaraj Temple in Odisha.

Union Minister Dharmendra Pradhan said the Centre will not take any step that hinders the development of Srimandir and in anyway interferes with local sentiments. He also urged Union Culture and Tourism Minister Prahlad Singh Patel to publish the bylaws draft in Odia language.

“He (Union Minister Prahlad Singh Patel) assured me to uphold the best interest of the people of Odisha with highest regards for the sentiments of Lord Jagannath’s devotees,” Pradhan wrote on his Twitter handle.

Meanwhile, temple sevayats also opposed the centre’s move and there is wide spread resentment among the people of the State, which in coming days will turn into serious situation, warn the servitors. 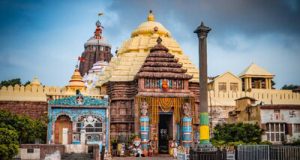