New Delhi: The Appointments Committee of the Cabinet(ACC) has confirmed the appointment of veteran IRS officer Jagannath Bidyadhar Mohapatra as the Chairman of the Central Board of Direct Taxes (CBDT)

In May 2021, Mr.Mohapatra, a 1985 batch IRS officer, had been given the additional charge as CBDT Chairman after the extended tenure of incumbent PC Mody ended that month.

The order issued by the Department of Revenue, which is under the Union Ministry of Finance, said, “Jagannath Bidyadhar Mohapatra, Member CBDT, shall discharge the duties and responsibilities of the post of Chairman, CBDT, in addition to his own duties for a period of three months or till the appointment of a regular chairman, whichever is earlier.”

It stated the arrangement has been “decided with the approval of the Competent Authority”.

Mr.Mohapatra, along with his two Indian Revenue Service (IRS) batch mates, had been appointed to the CBDT on 27 May.

Before this appointment, Mr.Mohapatra was serving as the Principal Chief Commissioner of Income Tax for the Andhra Pradesh and Telangana region.

Mr.Mohapatra is the second Odia to be elevated to this highest post of Direct Tax in the country.

PK Mishra was the first Odia to hold this post, but his tenure was a very brief period of barely one month. 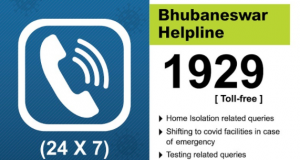 Tathya Correspondent - July 22, 2021 0
Bhubaneswar: Proving its mettle as an important establishment to help citizens during the COVID-19 pandemic, the 1929 24X7 City Call Centre of...