Mr.Tripathy is the Director Information and Public Relations of Government of Odisha.

In fact as many as 11 officers of Odisha Administrative Service (OAS) on Friday promoted to the IAS cadre.

The Department of Personnel and Training (DoPT) in the Ministry of Personnel, Public Grievances and Pensions has issued a notification in this regard.

“In exercise of the powers conferred by Rule 8(1) of the Indian Administrative Service (Recruitment) Rules, 1954 read with regulation 9(1) of the Indian Administrative Service (Appointment by Promotion) Regulations, 1955 and Rule 3 of the IAS (Probation) Rules 1954, the President is pleased to appoint these members of State Civil Service of Odisha to the IAS against the vacancies determined by Government of India under Regulation 5(1) of the said regulations,” read the notification.

This notification was issued in consultation with the State Government for the Select List of 2020 on probation until further order and to allocate them the Odisha Cadre under Rule 5(1) of the IAS (Cadre) Rules, 1954. 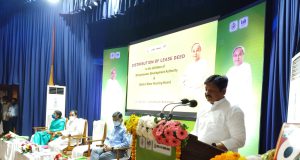