Bhubaneswar: The equipment for a clandestine radio as well as radio experts sent by the secret service wing of Netaji Subhas Chandra Bose’s Indian National Army landed by submarine at Konark in 1944.

Capital City based Historian Anil Dhir has revealed in his upcoming book – “Netaji and Odisha: The Untold Stories”.

In his book, Mr.Dhir wrote that in March 1944, a fully armed Japanese submarine left its secure base in Penang, carrying four INA Secret Service officers along with a powerful transmitter set, destined to land at Konark beach in Odisha.

Before they embarked on the journey, Netaji had messaged them directly saying: “Though few in number, your mission will strike a deadly blow at the entire British secret service. The radio base must be set up in Calcutta at all cost”.

The submarine reached its destination on March 14 and they landed with the equipment at daybreak. “They buried their equipment in the sand near the Konark temple. Later, they dispersed with the parts, camouflaged as Gramophones and made their separate ways to Puri, Bhubaneswar and Cuttack railway stations,” Mr.Dhir said in his book.

However, one of them was caught at Puri, while the remaining members separately boarded the Madras Mail on different dates and reached Calcutta. They met at the Metro Cinema on March 19, he said.

After the transmitter was set up in the house of a dental surgeon Dr. Dutt at Behala, the team  started sending coded messages to INA Headquarters about British troop movements, the landing of bombers at Dum Dum airbase and naval movements.

The INA’s radio service functioned actively for six months before the British intelligence  closed in on it and ultimately arrested all involved.

The “King’s Witnesses” included 12 traitors, who were trained at the INA Centre in Penang, Dhir said, adding that the three were condemned to death by hanging.

It was only with the intervention of Mahatma Gandhi that they escaped the gallows. Writing to Lord Wavell, on September 14, 1945, Gandhi wrote, “It will be a political error of the first magnitude if this sentence of death is carried into effect.”

The incident was reported in a British Newspaper on 7 June, 1945. 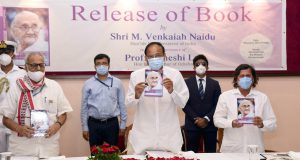