Bhubaneswar: The possible third wave of Covid-19 pandemic is likely to cause less impact than the second wave, senior Health officials said here on Monday.

Speaking to reporters here, Public Health Director Niranjan Mishra said, “So far there is no strong information about the occurrence of third wave of Covid-19. However, many scientists have opinioned about it and some countries have also witnessed the third wave.”

Usually, the intensity of the third wave of a pandemic is less impacting than the second one, Dr.Mishra said. He said the impact of third wave is largely depends on vaccination coverage. The Government is now giving full emphasis on vaccination program so that the maximum number of people will be covered and the State will be able to manage future waves in a better way, Dr.Mishra said.

Stating the State is well prepared to face another wave of the pandemic, the Director said, “We have well equipped health infrastructure. We have to sustain it for future utilization if the third wave arrives.”

Speaking on use of steroids in treatment of Covid patients, he said that the drug will be administered in case of mild to critically ill patients, as per the guidelines issued by the Centre.

Making a similar statement, Director of Medical Education and Training (DMET) CBK Mohanty said the third wave, which has already outbreak in a few foreign countries, is found to have less impact than the second wave.

Asked about the newly detected Delta Plus variant of the Coronavirus, Dr.Mohanty said the new variant was found in India just a few days ago and only seven such cases have been reported from Maharashtra.

“With such a small number of cases, we can’t predict its severity so early. If we detect the cases as early as possible and isolate the patients accordingly, the new variants can’t spread fast and cause much damage,” the DMET stated. 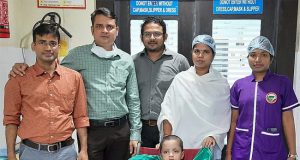 Tathya Correspondent - November 10, 2021 0
Bhubaneswar: Doctors at the Institute of Medical Sciences and SUM Hospital here fought to save the life of a 7-year-old boy who...