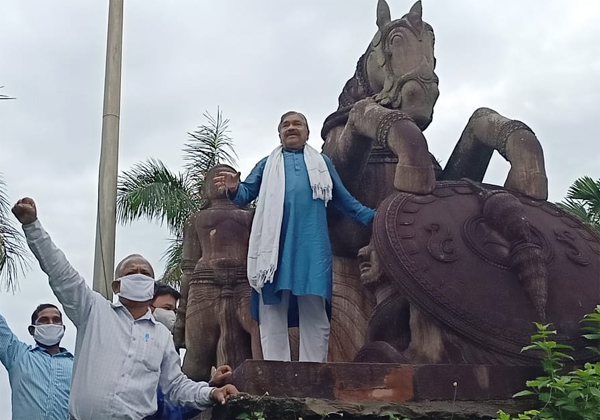 Bhubaneswar: The iconic warrior-horse statue at the Master Canteen Square in the State Capital will not be relocated, a senior official said on Tuesday. Congress Veteran Lawmaker, Suresh Kumar Routray welcomed decision of the State Government.

The official said the sandstone sculpture will remain at the Master Canteen Square and there will be a slight realignment in the design of the road.

The statue is a replica of the original warrior-and-horse sculpture found at Konark Sun Temple.

The BSCL had planned to relocate the statue to the Raj Bhavan Square to make way for a multi-modal hub at the Bhubaneswar railway station.

The warrior-horse is the official emblem of the state administration.

The opposition BJP, Congress, academicians, and sculptors had been opposing the relocation of the statue, even as the BSCL’s decision to shift the warrior-horse replica had been approved by the culture department.

Officials said Chief Minister Naveen Patnaik intervened and directed the authorities of the BMC and the BSCL to change the decision and rather beautify the surroundings of the iconic statue.

Meanwhile, a team inspected the statue and detected some cracks and scratches which will be repaired soon, an official said.

The smart city authorities have been given the responsibility to hire skilled artisans for the protection and restoration of the iconic statue.

The Bhubaneswar Development Authority (BDA) had erected the sculpture at Master Canteen square in 1988. It was created by late sculptor Raghunath Mohapatra.

Tathya Correspondent - October 4, 2021 0
Bhubaneswar: With a view to protect the health of the public and prevent spread of COVID-19 during the ensuing winter season, the...