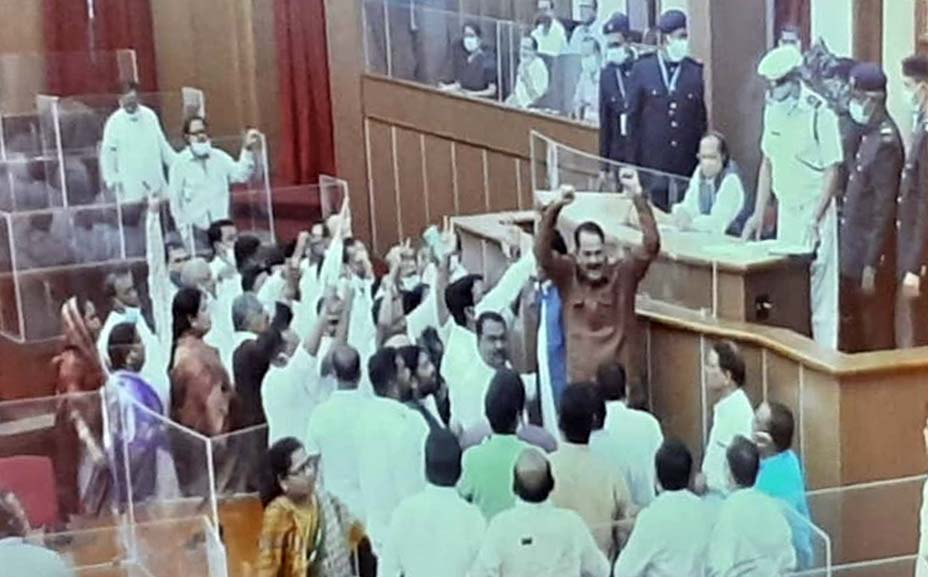 Bhubaneswar: It seems that neither the Treasury Bench nor the Opposition Members are ready to reach to a solution over the impasse in Odisha House. BJD, BJP and Congress Members are maintaining stubbornness over their demands.

The suicide attempt by a Saffron Lawmaker inside the Odisha Legislative Assembly over alleged mismanagement in paddy procurement echoed in the House for the fourth consecutive day on Tuesday.

As pandemonium continued Speaker Surjya Narayan Patro adjourned the proceedings till 10.30 AM on Wednesday in the wake of stalemate due to noisy protests by Treasury Bench Members and Opposition parties.

As soon as the House assembled for the question hour at 10.30 AM on 16 March, the ruckus erupted with the Treasury Bench and Members of the opposition parties engaging in slogan shouting in the well of the assembly.

The treasury bench members demanded an apology over the BJP MLA’s suicide attempt inside the assembly.

The BJD Members were of the opinion that the suicide attempt by the BJP’s Deogarh MLA Subhas Panigrahi has earned a bad name for the state and also tainted the image of the house.

“We will not allow the House to function until Panigrahi tenders apology,” Government Chief Whip Pramila Mallick said.

Leader of Opposition Pradipta Kumar Naik rejected the BJD’s demand and said that Chief Minister Naveen Patnaik should apologize for his Government’s mismanagement over the procurement of paddy.

Congress Lawmakers also staged a protest in the Well of the House and demanded procurement of paddy from all the farmers of the state.

“We will continue our protest unless farmers’ grievances are addressed,” Congress  Chief Whip Taraprasad Bahinipati said.

Mr.Patro convened an All-Party meeting to resolve the issue, which yielded no result.

However, Congress Members walked out of the meeting, alleging that the Speaker started the discussion on the issue relating to the BJD’s demand, and not on the paddy procurement mismanagement matter.

BJP Members also voiced concern over the matter and urged the Government to lift paddy immediately from the farmers.

Tathya Correspondent - November 14, 2021 0
Bhubaneswar: The Winter Session of State Legislative Assembly will start from 1 December and continue till 31 December. As...