Bhubaneswar: For the first time in this monsoon season, Hirakud dam authorities on Monday morning released flood water through five sluice gates due to heavy rainfall upstream of the reservoir.

The authorities of the Hirakud dam project opened five sluice gates of the dam at 1 AM and released flood water to Mahanadi river.

Since number seven is believed to be a lucky one, the RDC Suresh Chandra Dalei opened this gate while District Collector Ananya Das opened gate No 8.

As per the prefixed lagna, the dam gates were opened in the right time after Puja and prayers and also breaking coconuts.

On today, the water level in the Hirakud dam reservoir stands at 613.27 feet against the maximum water level (MWL) of 630 feet.

Chief Engineer of Hirakud dam project Ananda Chandra Sahu said as per the rule curve it was decided to release the first rain water to river Mahanadi on Monday.

Earlier, the Dam authorities have warned the people residing on the downstream and also the river side to remain alert of the flood water being released from Hirakud.

The dam authorities released water through sluice gates for power generation, irrigation in the Hirakud command area for agriculture, local industries and for drinking water purposes, he added.

The Chief Engineer said to maintain a perfect balance the inflow to the reservoir and the outflow is recorded at 1,01,156 cusecs. Around 75,000 cusecs water is being released into the Mahanadi river through the five gates. 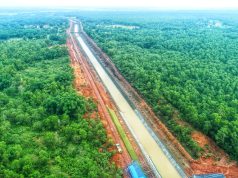 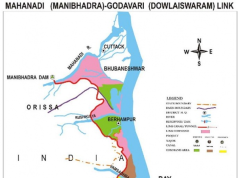